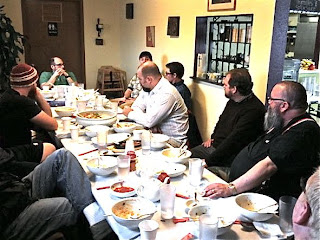 How wonderful and pleasant it is when brothers live together in harmony! For harmony is as precious as the anointing oil that was poured over Aaron’s head, that ran down his beard and onto the border of his robe. Harmony is as refreshing as the dew from Mount Hermon that falls on the mountains of Zion. And there the Lord has pronounced his blessing, even life everlasting. -Psalms 133

Dew and Oil....refreshment and empowerment...newness and anointing...something coming down and settling upon. All these images come together in my mind when I reflect upon my fellow friends and partners in the gospel in Ecclesia Spokane. There are many different groups and initiatives in Spokane for ministry leaders, more than I can fit into my calendar. Every pastor or person, has to find places and people that they can do life with...finding colleagues is one thing...finding friends is another.

ES for me, is the first gathering of pastors that I have had the privilege to shoulder up with that works faithfully at building authenticity into the mix. Among ES, professionalism has a hard time taking root or squeezing out the grace of becoming real...here we are people, instead of mere project supporters. So often in the past, most of my involvement in the pastoral networking world has left me feeling like I was continually being hit up for some Amway meeting. It was about product instead of people....what can you do for me instead of how can I serve you.

I often got lost in the rush to do something important for the city or the Kingdom or the network. Soul-care was low on the list of priorities...friendship was streamlined into partnership related to possibilities. Events instead of unfolding, projects instead of pondering, doing instead of being, output instead of input....goals instead of gratitude....gifts instead of grace....consumptions instead of contemplation.

It was often painfully lonely...I would participate but hardly ever felt personal. A relational ache would often backwash on me, like a bad hangover. I grew weary at my many attempts at doing the pastoral life with others. I became disillusioned at always being forced to nibble on Divine community instead of being able to gorge my relationally starved soul....it was often a painfully anemic endeavor.

I have been graced to participate in an unfolding "Mission Shaped Network" that for me....chimes in soft harmonies, that help undergird a sense of pastoral belonging and becoming. ES is a space where I can do the work of theological reflection in the mindset of greater hearts and minds. Where I can hear truth from multiple journeys and generations. It's been a space to laugh, hurt, share and despair....as well as dream, reengage, think, pray and co-taste and nurture the life and ministry of some amazing leaders.

It's a table and meals are planned but everyone's able to bring a dish. It's a place where answers are allowed but questions are required and welcome, holy tension is expected both theologically and philosophically. Doubt and struggle is not anathema. At the end of the day, I don't feel like I have to be the best pastor...just a better one...in time.

Among us...sin is expected and holiness is found...it's a refreshingly unashamed embodiment of "Simul Justus Et Peccator". Persnickety piousness...will be quickly driven out, like a pastel wearing Yanni fan...at an Iron Maiden concert.

I guess what I am trying to say...is thank you.

Thanks to all the folks that have thrown in together, work hard at forming and flowing and keep at it...despite the many reasons life and personalities often derail such endeavors.

My soul is more large because of the feast found among us.
Posted by Unknown at 5:30 AM

I heartily agree. Thanks for putting the experience into words.