I've got a burden of love...for a people who became my enemy 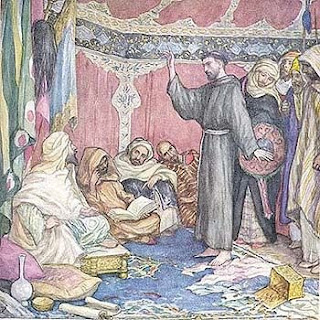 "If our convictions lead us to believe there is no hope for those outside our own faith or with no faith..." there is a danger of "treating others as if they know nothing, and we have nothing to learn". "Belief in the uniqueness and finality of Christ allows us a generous desire to share and a humble desire to learn".-Archbishop Rowan Williams , in his address at the Guildford Cathedral titled The Finality of Christ in a Pluralist World

About 12 years ago, I had a burden laid on my heart by the Spirit of God for Muslim people. It manifested itself in a ethos of prayer and study and was leading to thoughts of mission. I genuinely found love growing in my heart for a people I didn't even really know. I knew character both Christians and Culture...but not personhood. God breathed in a tenderness and a vision to see a people not simply a project.

That event has messed up this little love affair. Now my internal Christian reality has become at odds with my civil religion.
I have been wrestling with this tension for awhile...and honestly a lot of my war talk, has emerged out of this sifting between love and mission and war and patriotism.

When I read this story below...I resonated deeply with the example of Christ shown by this little Friar.

In 1219 St. Francis and Brother Illuminato accompanied the armies of western Europe to Damietta, Egypt, during the Fifth Crusade. His desire was to speak peacefully with Muslim people about Christianity, even if it mean dying as a martyr. He tried to stop the Crusaders from attacking the Muslims at the Battle of Damietta, but failed. After the defeat of the western armies, he crossed the battle line with Brother Illuminato, was arrested and beaten by Arab soldiers, and eventually was taken to the sultan, Malek al-Kamil.

Al-Kamil was known as a kind, generous, fair ruler. He was nephew to the great Salah al-Din. At Damietta alone he offered peace to the Crusaders five times, and, according to western accounts, treated defeated Crusaders humanely. His goal was to establish a peaceful coexistence with Christians.

After an initial attempt by Francis and the sultan to convert the other, both quickly realized that the other already knew and loved God. Francis and Illuminato remained with al-Kamil and his Sufi teacher Fakhr ad-din al-Farisi for as many as twenty days, discussing prayer and the mystical life. When Francis left, al-Kamil gave him an ivory trumpet, which is still preserved in the crypt of the Basilica of San Francesco in Assisi.

"This encounter, which occurred between September 1 and 26, is a paradigm for interfaith dialog in our time. Despite differences in religion, people of prayer can find common ground in their experiences of God. Dialog demands that we truly listen to the other; but, before we can listen, we must see the other as a precious human being, loved by God. There is no other path to peace in this bloody 21st century.

Francis and his brothers did not make this trip as part of the battle to regain the Holy Land. Rather, they went in opposition to the mainstream theological and political orthodoxies of the time, to meet the Muslim people, and to live among them as “lesser brothers.”

Francis and his brothers went to be present among this people who were being portrayed as evil enemies of Christ, and, in his evangelism of presence, Francis found the spirit of God to be alive and at work within the Muslim people, then called “the Saracens”. Francis admired their public, repeated acknowledgment of God and call to prayer, and he appreciated the deep reverence they showed to their holy book, the Qur’an.

While the main trend of the time was for Christian preachers to deliver strident, inflammatory sermons against Islam, Francis forbade his brothers to take part in these exercises. He demanded that his brothers be present first and foremost, living with and among the Saracens. They were to preach only if they felt that it would “please the Lord.” Francis worked to prevent the brotherhood from becoming embroiled in the grasp for civil and ecclesiastical offices and power, and kept the community’s focus on serving their neighbors for the glory of God only."

The Word became flesh and blood, and moved into the neighborhood.
We saw the glory with our own eyes, the one-of-a-kind glory,
like Father, like Son,
Generous inside and out,
true from start to finish.
-John 1:14
Posted by Unknown at 8:34 AM

I'd recommend the link at the bottom for the story of how the son of a Hamas leader became a Christian. If I really believe that Jesus died for everyone, how can I kill them? Am I not literally sending them to Hell? Isn't that God's job? If I kill them before they have the chance to accept Him, aren't I taking God's job of judging and doing it for Him? What speaks louder to the muslim world, crushing them and killing them or refusing to support violence in their countries with ALL that would imply in our foreign policy. I hope that our leaders will eventually realize that the only way to win a war of ideas is to have a better idea ie. love. It is difficult to change someone's mind by killing them or their family. Been there, got the t-shirt, can testify it isn't working so good.

Saint Francis is one of my heroes. I try to approach my friends, family, coworkers, neighbors, community, acquaintances and enemies with this exact same mentality, as much as God has given me the grace to do so.

It reminds me of the story in one of McLaren's books, about the lady who taught her daughter that Muslim women cover their heads to show their love for God. Love, grace, peace, mercy, kindness... May we have more of these in the world as God's Kingdom is made manifest in all of us, His children.