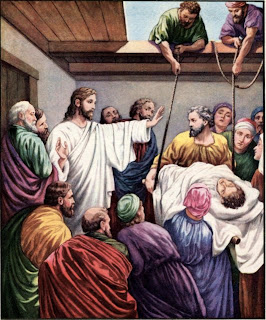 Religion is only concerned about Text & Time...generally, a future time. The Pharisees, the teachers of the Law, the Scribes were gathered to "catch" Jesus in some scripture based conundrum, some law breaking snare, a possible cataclysmic religious faux pas. Hopefully finding enough evidence to convict him in their own private traditional and theological courts. These fundamentalist "bibliodolaters" were not concerned about the suffering people around them...particularly the paralyzed man that had just been lowered through poor old Caleb's, recently renovated tile roof! They were concerned not about people...but words. 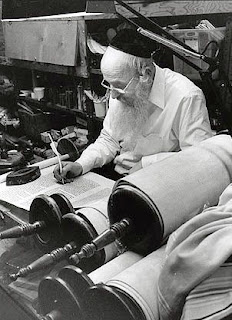 These kind of people are known as the Bible book worms...the "Scribes"...everything to them is about "translating, copying, interpreting, splicing and dicing greek verbs, Aramaic, Greek and Hebrew tenses and nuances. They also gather enormous libraries of "commentaries"...they love to talk about what the famous rabbi, teacher, preacher or professor has said about this or that verse. Soon they find themselves seeing all scripture through the lens or interpretation of the commentaries of the last person they learned from and that person learned his commentary from his "scribe" and on and on it goes...until soon, you're not sure if you are preaching or teaching "commentary about the Scripture or the scriptures themselves...but to these folks...they are ultimately, one and the same.

These Pharisees are as their name means, the "separated ones". They live with their noses both up and down. They live with a nose up at the unwashed, unreached,undereducated, pagan or unclean neighbors. They would rather go in their closets and talk to God about men...then go outside and talk to men about God. They live with their noses down in the spine of their books. They think of themselves as the cutting edge or the latest and the greatest, restorers, reformers, the faithful, pure, the undefiled, the truth bearers, the defenders of the faith, the fundies and conservatives. These folks get mad not at injustice or suffering of lives...but at mishandling words.

They are sure that "how you live" isn't and issue of eternity...but what you Know and it was these kind of people that had Jesus nailed to a chunk of bloody wood, on a garbage dump...far enough outside their beloved...'Holy City'.

Yes, the Lord of the Word...was rejected in favor of the Word of the Lord. They would rather have a God they could put in their rucksack...then a Word made flesh.

As in this story...they are especially enraged at anyone who lives a life of scandalous forgiveness and grace. Jesus was passing out forgiveness, like it was a key to the kingdom that he possessed. He was a sin forgiver...and they had an extreme problem with that. He had no papers, no degree from their seminary, He wasn't a priest, a scribe, a Pharisee or even one of those liberal "Sadduceess". He could draw crowds that they never were able to gather. He was outside their establish order. He was a rebel that wasn't conforming to the natural religious order of protocol and tradition. He wasn't qualified in their minds...and yet, He felt perfectly comfortable doing God's job!!! To them...it was Blasphemy.

Grace ticks people off...and too much grace will get you crucified. Religious people want judgment...not forgiveness. Justice...not mercy. They revel in suffering...especially if it is among "those" people. They can step over a broken person...in order to argue a theological point about the possible navel of Adam. Crippled people are of no consequence...the human condition doesn't matter...what matters is eternity. Your'e body doesn't matter to them..unless you are doing something sexual with it...then they get real religious about it. But in general...it's all going to burn in God's final judgment anyway...so let the people starve...they don't need a good physician...just a Soul doctor...and only one from their universities.

Because they are some of the most "unfriendly" people around...the world knows it and most people who have stumbled along this Jesus path have come to know it. Until we as followers of Jesus reject this unbalanced head congested faith and begin to "see" the very least of these people, in front of us as "Christ disguised"...we will continue the long religious tradition of being only known as a people of a book...instead of the Followers of Jesus.
Posted by Unknown at 7:54 AM