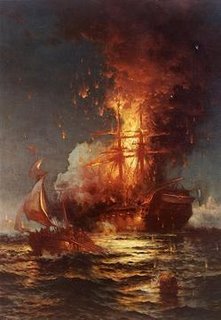 "Burning of the Frigate Philadelphia in the Harbor of Tripoli, February 16, 1804"
It depicts USS Philadelphia, previously captured by the Tripolitans, ablaze after she was boarded and set afire by a party from the ketch Intrepid led by Lieutenant Stephen Decatur.
Painting in the U.S. Naval Academy Museum Collection

In 1786 A negro and John Murray went to negotiate with Tripoli's envoy to London, Ambassador Sidi Haji Abdrahaman or (Sidi Haji Abdul Rahman Adja). They asked him by what right he extorted money and took slaves. Thomas Jefferson reported to Secretary of State John Jay, and to the Congress:

The ambassador answered us that [the right] was founded on the Laws of the Prophet (Mohammed), that it was written in their Koran, that all nations who should not have answered their authority were sinners, that it was their right and duty to make war upon them wherever they could be found, and to make slaves of all they could take as prisoners, and that every Mussulman who should be slain in battle was sure to go to heaven.

You can read more about early America's first and second Barbary Wars with the muslim's on the North Africa coast here:
http://en.wikipedia.org/wiki/First_Barbary_War
Posted by Unknown at 11:12 AM

it's interesting that americans refer to war against opposing forces as a "war on terror".

Well...if I was abducted by slave traders and marauding pirates...terror would describe it.

they are referring to terrorism |ˈterəˌrizəm| noun the use of violence and intimidation in the pursuit of political aims.

Should I have changed the title to:
America's first war on Muslims?
Would that have been more accurate?

No one seemed to be chilled by the quote, where the muslim leader justified his mass enslaving of innocent sailors with the Koran. That way back then he was espousing the same kind of martyrdom mindset that has fueled terrorist activities of late. I guess the the use of a noun or adjective is defiantly more important...than death, slavery and kidnapping.

Have you read the history of the Barbary wars? There was a whole lot of politics going on in the actual history of the events. Jefferson trying to build a international collation of nations to try to force the Barbary nations to stop pirating, enslaving and holding hostage nations to pay them enormous amounts of money to stop them from pirating.

The US paid like 20% of its annual income in the first years to these pirates! Come on you telling me there was no political issues surrounding that whole situation? Imagine if that happened today...how would any government respond to such a action by a nation? Economics, war, international negotiations, clashing ambassadors, congressional debate, paying ransoms for lives and appeasement, being held hostage by the threat of terror on the high seas. Safety ONLY by force and who had the strongest gun to protect themselves from being kidnapped, killed or held for ransom. Daring rescues by soldiers of americans and many other Europeans form the slave houses and prisons in North Africa.

The whole point was to share that history repeats itself and those who forget to look back...stumble on the way forward.

Ya...quite creepy, the muslim leader's justification of slaughter, torture and slavery. I don't believe I remember reading about invasions from radical muslims in any history class. It was, I'm sure, referred to as "pirates from other countries" with no religious ties included. I wonder why that was? Might have been useful information. - LeeElla