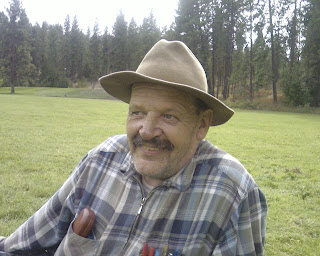 This is Roger...about 4 years ago, when I first met him. This was taken at my birthday party in the park, I had recently met Roger and invited him to come down and enjoy some BBQ. He came and for the next 3 years we began getting to know each other in the neighborhood. I would invite him to church, events and various opportunities that we would make available in the neighborhood but he always turned them down. He would explain how he wasn't a people person, or was busy, or just didn't want too. Over the years, he started explaining to me that he read the bible and thought maybe we should have a Bible-study. But whenever I would invite him to one...he would say no. Then I would offer to come over to his house and do a study...he would say no. Basically it always seemed like a dead end, as far as making something "spiritual" happen...so I just kept extending neighborliness towards him.

Then one day a few months ago....he came to my house and asked me what I was doing. I told him, I was writing. He explained that he was lonely and that he didn't have many friends. I asked if he wanted to go have coffee. He smiled and accepted and that began our regular Friday morning Breakfasts and Bible-study together.

We go and eat something good and bring our Bibles and go through a basic christianity study. It's always a good time together. Mysteriously....after our first Breakfast Study...he showed up at Church that Sunday and has been coming ever since. 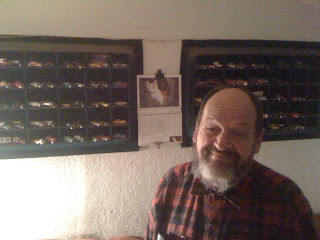 This is a shot of Roger in his house, showing off his Matchbook cars collection. He is quite proud of all his really old cars and the display on his wall. I told him I had to take a picture of his collection...he was most inclined to do it.

"Whoever is least among you...will be the greatest." -Jesus

When I read those words...I think of the "Rogers" in our communities. People who are often forgotten, ignored or looked over. You wont find their faces in the glossy church promo flyers or in the flash Video's on the websites. They don't lead much, or contribute to the Sunday Show....except...they often find their way into fundraising newsletters. We love to "reach them" but that is where our relationship with the "poor and lost" tragically, often, ends. They are people we "Go To" but rarely people we call friends. They are "projects" to us...they are ministry campaigns, meant to soothe our slightly unsettled, middle-classed souls. We do stuff for them and that somehow makes us feel better about ourselves. We mail stuff to their houses and pray blanket prayers over their neighborhoods...but we don't truly know them.

We fail as the church...when we depersonalize people. When we end up having to go on missions trips to connect with them...instead of becoming neighbors and sharing life together. Roger has taught me many lessons about how to deconstruct my "evangelism" paradigm...turning from "reaching people" to simply loving them and let God reach them.

Replacing agenda's with pancake's has humanized this pastor...and helped me truly enjoy the man in front of me...someone who I now call my friend.
Posted by Unknown at 6:16 PM

It is so hard not to think of people as "projects". For me, I think I do it unintentionally. I had a friend where I got so frustrated with her. Looking back now, I realized that I had turned her into a project, and my frustration was borne out of not seeing "results". I look back now and wish that I had just treated her as a person and not a project. I thought I was loving her, but really, I wanted her to change. My misguided understanding of what love is and how people "should" behave alienated this woman and led to much anger and anxiety. Lesson learned. Next time will be different.

This post truly ministered to my heart. This very concept is exactly what God has been putting on my heart. Loving people with absolutly no strings attached. Being there for them, being their friend whether they turn to Christ or not. Loving and appreciating them for who they are.

"...and my frustration was borne out of not seeing "results"."

I can also attest to that. I think the real blessing that the "Rogers" of our neighborhood have brought to our community is the realization that we all are impacted and changed through the process.

I'm honored to have Roger in our church.

That's about the richest post I've read in some time. Having an uncle that had mental deficiencies, hard to describe now what the shortcomings were, but as a boy they were invisible to me, I only knew he was the only man that had all the time for me I could ask for. The gift he gave me of his time and love reaches so deep within me that it still makes this 62 year old man's eyes well up. May you and Roger enjoy each other's friendship for years to come.
Love Dad