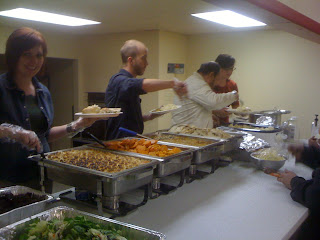 "I can't wait to serve the good Lord."

That's what Roger kept telling me as we neared the time when we would open for Thanksgiving dinner. A week ago, I had asked Roger if he would be willing to help serve food at the meal. At first he said no and gave me some reason why he thought he couldn't. But I asked him to think about it...and later that week, he told me he wanted to do it, if I helped him figure out what he was supposed to do. Sunday, he got up and prayed about the dinner and as it approached his excitement grew as well.

I told him he had to clean his bachelor hands, trim his nails really good, wear some clean clothes and come prepared to serve. The next day he showed up at the coffee house with freshly trimmed nails and clean hands. Tonight he showed up early, dressed in a nice white jacket and ready to work. He had invited all his family that week and they were hesitant...but tonight he said they all were coming. Above is a shot of Roger working alongside Lisa, TJ and Andrea...gloved up and smiling from ear to ear. His family came, took pictures of him serving and enjoyed a meal with us. Roger was so proud....it really was quite a precious moment. 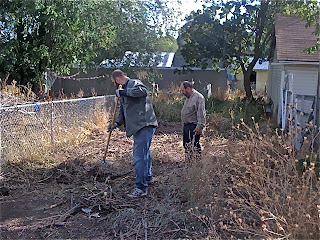 Roger is a good friend, a polite man, a hard worker and always friendly. Roger represents the many people in our community that have various mental or physical disabilities that often have a hard time finding their place among others. I was reminded of this today as Dave, a fellow pastor friend, told me that Daniel, his friend, a young man in his 20's, who also had a mental disability; killed himself in the local jail....he suffocated himself with toilet paper in his cell.

He was homeless, lived in a car with his buddy in West Central Spokane. I met him about a week ago when I was having coffee with Dave. He was quiet but polite too. He evidently got arrested for something again...they were often breaking some law and getting in minor trouble...and for some reason...that time....he decided living was harder than dying.

When I heard this young man, I had just met a week ago...had taken his life...I was heart broken...and even now tears well up, as I think of the many men and women who get shuffled around our cities. They are in and out of jail...half way houses, shelters and programs. They fall through the cracks...often smart enough to make it on their own...or at least survive...but not always able to thrive. It's hard living in a culture that exalts education, appearances, money making potential, gifting, world shaking destinies, social power, charisma, talent and the ever bowed too altar of potential.

I thought of Daniel...when I watched Roger tonight.

I think of Jesus, when He said:

I think of how many other forgotten and overlooked saints are out there in the dark...thinking about killing themselves.
It's in moments like these that I am eternally grateful to be where I am, with the people I am with, doing what we are doing. I truly believe that Jesus is among us...and I see Him shining so very bright in the least of these among us....and in serving them...we truly do...serve the "good Lord".

And really, in the end, we end up truly seeing our own poverty and discover that we were the ones who were really the least...and together, by God's grace...we end up worshiping Jesus in a manner that matters...for Rogers and for Daniels.

"He has showed you, O man, what is good.
And what does the LORD require of you?
To act justly and to love mercy
and to walk humbly with your God."
-Micah 6:8
Posted by Unknown at 8:36 PM

Man, this story gets to me. The impact of one person, it truly is a ripple that never ends. And just as true, we never serve "just one person", because of this ripple effect, we hear it said, "If I only help one person.....", we never help only one person; we are all so interconnected with friends, loved ones and family that helping one ends up helping many, and of course, usually the one who is blessed most is the giver.
Thank you Lord.
Love Dad