Waiting on Tables for Kingdom Expansion.... 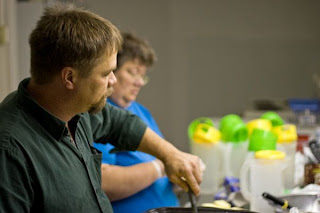 There is a lot of talk these days about how to "reach" those who do not know Jesus Christ as savior. Churches spend countless hours and bucks on figuring out the mysteries of the cultural lock on peoples hearts and minds. We print and publish reams and reams of literature and net ink on the topics and yet, the chasing after the wind seems to continue.

The "trick" is elusive...the latest and greatest strategy is often yesterday's ministry failures, repackaged for the newest potential pastoral consumers. In the end...our churches are often full of disillusioned Christians; that have been jacked up on emotional and false prophetic hopes...or wearied out by task master like pastors that drive the sheep from one project to the next. These people are always being offered that golden carrot of revival, or renewal or bigger an better this or that...and for many Drained Disciples, this hamster-wheel version of religion, is abandoned.

In the end, I truly think that living out the gospel as Jesus lived it...is the simple pattern.

Pick some folks...be with them...in life and mission...teach them, through training them with hands on work. Weave prayer and study of God's word in your community; and practice love, among one another and in the places God has determined you to live. And...do this among the least of those, among us. 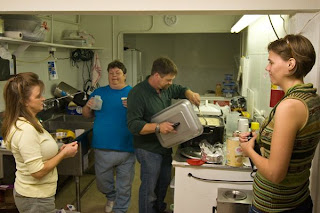 "In those days when the number of disciples was increasing, the Grecian Jews among them complained against the Hebraic Jews because their widows were being overlooked in the daily distribution of food. So the Twelve gathered all the disciples together and said, "It would not be right for us to neglect the ministry of the word of God in order to wait on tables. Brothers, choose seven men from among you who are known to be full of the Spirit and wisdom. We will turn this responsibility over to them and will give our attention to prayer and the ministry of the word." This proposal pleased the whole group. They chose Stephen, a man full of faith and of the Holy Spirit; also Philip, Procorus, Nicanor, Timon, Parmenas, and Nicolas from Antioch, a convert to Judaism. They presented these men to the apostles, who prayed and laid their hands on them. So the word of God spread. The number of disciples in Jerusalem increased rapidly, and a large number of priests became obedient to the faith." -Acts 6:1-7 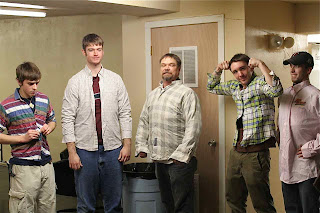 I am blessed to be surrounded by men and women who are "full of the Spirit and wisdom" and as we see the life of Mission and the Life of attending to Spirit...kiss....we are sure to witness, "the word of God spreading and disciples increasing rapidly and people becoming obedient to the faith".

This dance of mission to people and ministry to the Lord...is unfolding among us, because the Lord is big in...little people. I stand amazed at the glory of God being found among the hands and hearts of those I am called to pastor. They amaze me, convict me, inspire me and often out perspire me...they are my co-laborers who allow me to work at fulfilling the vision of God unfolding in us and through us and...among us.

They are good people...doing small things...with great love.
Posted by Unknown at 5:25 PM