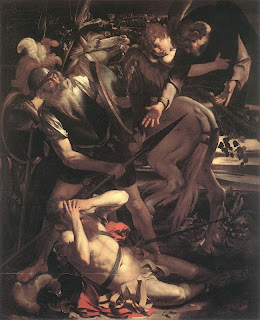 "But Saul began to destroy the church. Going from house to house, he dragged off men and women and put them in prison...Now Saul, still breathing threats and murder against the disciples of the Lord, went to the high priest, and asked for letters from him to the synagogues at Damascus, so that if he found any belonging to the Way, both men and women, he might bring them bound to Jerusalem. As he was traveling, it happened that he was approaching Damascus, and suddenly a light from heaven flashed around him; and he fell to the ground and heard a voice saying to him, "Saul, Saul, why are you persecuting Me?" And he said, "Who are You, Lord?" And He said, "I am Jesus whom you are persecuting." -Acts 8:3 & 9:1-5

Imagine if in our day...God raised up another Middle Eastern force of global missionaries; handpicked from a group of fundamentalist, religious extremists...who are also breathing threats and murder.

Saul was such a man...and God changed Him from the inside out...and Saul...became known as Paul. Not a murdering religious zealot who would gladly stand over the infidels as they were stoned to death...but Paul, the self sacrificing missionary who would become the Apostle to the Gentiles. Eventually he would give up his own life for the gospel of Jesus, as a martyr for the faith he once persecuted.

In Acts 9:10-19 we have the story of how God used a disciple named Ananias to embrace and empower Paul through forgiveness, prayer and ministry.

At first Ananias was nervous about God’s call to him to reach out to this well known, violent religious fundamentalist. How could God be calling him to cross paths with one of the most violent religious aggressor against the fledgling church?

How could God be calling Ananias to endanger himself?
Would God require Ananias to risk imprisonment and possible death?

As a result...God moved through Ananias obedience and Saul’s vision was restored and he was baptized. Out of those baptismal waters...came the Apostle Paul. A new man...with a new heart and charged with a new mission.

I believe that this world needs less people who think with “Bullet’s & Ballots” and more who embrace a mission minded God. The church is charged with finding her Saul’s who are destined to become Paul’s and more than likely the most influential and misisonminded will come from among the most radical and terrifying opponents of Jesus.

World C
Christian World -- 33% of the world's population -- receives 94.5% of dollars given to Christian missions

Just maybe...if we would have been as zealous for the mission of God among the least reached peoples of this world...we wouldn’t be where we are today, Geo-politically?
Maybe the blood of the innocents lies not on the hands of the military but on the folded and slumbering hands of God’s inactive soldiers of the cross?

Maybe the hope of the planted isn’t in the hands of the Generals but instead in the pews of our churches?