A true man...is crucified upside down. 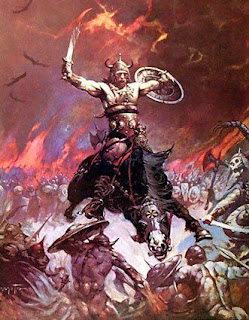 In 2000, I turned 30...and the above image was my most visceral archetype of God, my faith and the struggle to become the man, God had made me to be. Looking back at turning 30, it seems to be a dark time. It was a season of immense introspection and projection. What I thought were my enemies that were presenting me from rising, accomplishing and expanding...were more often my own personal demons. I thought I had a war to fight...and yet, the one that was raging the most fierce was really in my own soul.

Issues of masculinity, the role of becoming a man, was more a search for my own identity than anything as I reflect. I gravitated to images and portions Scripture that undergirded this inner identity journey. I don't think I used scripture as much as the scriptures allowed me to inhabit images that sustained or explained my path and my heart. The stories and pictures of God became more like totems that empowered me...light that guided me and food that nourished me. But as the years moved on...I see that what propelled me at one season...becomes detrimental in another. One face of God...isn't all the faces of God.

The Apostle John references: Children, Young Men and Fathers in 1 John 2:13...a triunity of manhood...phases perchance of the development of the soul of a man? I see a development in my inner life that moves from weakness to strength to weakness again. But where I used to think the ascension was the pinnacle....I am now wondering if it isn't the descent that is the true path of real power.

Much of our spiritual journey is most honestly a quagmire of self-interest....masked in conscious or unconscious self worship. Life will reveal that as it erodes away that armor we vainly attempt to hide ourselves behind. We dress ourselves up in success, education, achievements, fame, status, material possessions and a myriad of other image bolstering outer garments. We are consumed with how we appear to others....we spend billions of dollars on sucking out, pumping up, coloring, painting, sliming, trimming and primping ourselves for show. We become more desperate and grasp at push up bras, viagra, implants and transplants...as gravity starts overpowering our natural genetics and youthful metabolisms. We are slaves to the machines...the workout machines. All in the name of health...or....self...sometimes its really hard to see the difference. Is it any more harmful to exhaust your body on a machine till you piss blood or gag yourself with your finger and throw up lunch? I think not.

We want to change the world, make our mark, leave a name worth remembering...and yet, the fragility of life, the abruptness of death...constantly remind us that our lives must be about something more meaningful than the type of car I drive, the size of my church or the smallness of my butt. 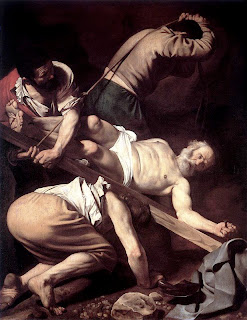 "I tell you the truth, when you were younger you dressed yourself and went where you wanted; but when you are old you will stretch out your hands, and someone else will dress you and lead you where you do not want to go." Jesus said this to indicate the kind of death by which Peter would glorify God. Then he said to him, "Follow me!" -John 21:18-19

I see the wisdom of the passage above and how speaking it to Peter, the rugged, fiery, sword wielding, self-made man....wasn't just a prophecy of his manner of death but also of the way that leads to life. I see a mystery in the slow death of the seed...that I pray to God I will be born anew in life everlasting...in this age and the one to come.

I think Peter got it...and his request to be put to death differently than Jesus...was a blossoming of humility's fruit. He no longer was the point of existence...he had decreased...so that Jesus might increase.

Great post Eric; I picked up Fenelon's book, "The Royal Way of The Cross" which used to be a favorite of mine, but somehow now, it has changed, more likely, I have changed; and what once seemed like fat and marrow, had lost some of its savor.
Different seasons, graces and visions.
Love Dad