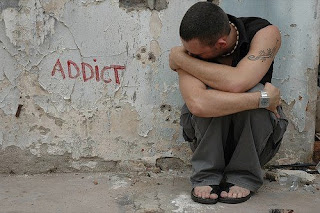 "The cords of death entangled me; the torrents of destruction overwhelmed me. -Psalms 18:4

I was stunned. Good morning, how are you's usually don't get followed with such a thud of a statement. Inwardly, I stumbled emotionally, I was in a bit of limbo and my tongue instantly grew fat and unresponsive. I didn't know what to say or how to process that this woman, who had been to our church a number of times and had recently requested me to marry them...was dead.

She had a history of mental illness and was a mother of five children...and now she was gone.

The irony of the moment was thick...I had just come from the coffee bar where I had been discussing with a friend my latest pondering, related to possibly going back to school and finishing my degree in Alcohol and Drug counseling. I had expressed how this month a growing burden had descended on my mind and arisen in my heart for the prisoner and the addict. I've been a chaplain in the local justice system and have always had a heart for the chemically dependent and those in recovery. That burden was part of the reason I felt led to start our church in this neighborhood.

As I stood there, fumbling with the news...that mission gripped me on a deeper level that it has before.

"And have mercy on some, who are doubting; save others, snatching them out of the fire; and on some have mercy with fear, hating even the garment polluted by the flesh." -Jude 1:22-23
Posted by Unknown at 4:45 PM

i kinda felt bad when i heard the news...i had prayed that God would keep them from getting married..at least right away...she had a long path of recovery ahead..and neither of them wanted to wait..
i can kind of understand..my friend hadn't had a girlfriend since he got clean himself about 7 years ago...i almost felt that my prayer had something to do with what happened...but i know we don't serve that kind of God......

Eric, I'm sorry for your loss and my condolences to the entire JW family.
We truly do not know the time & place when He will call us home. While we suffer here on earth, she enjoys the everlasting peace & beauty of heaven. He battle against addiction is now won.