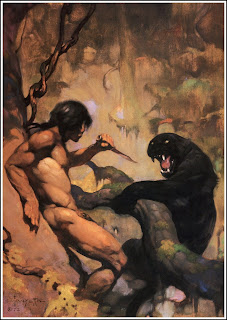 "God blessed them; and God said to them, "Be fruitful and multiply, and fill the earth, and subdue it; and rule over the fish of the sea and over the birds of the sky and over every living thing that moves on the earth." Genesis 1:28

I was asked:
"What is your stance on the idea that men are warriors, that they have an innate need to fight and wrestle?

My response would be that I believe that man is genetically equipped to fulfill the mandate given in the above verse in Genesis. The challenges of mankind rising, creating, producing, taming, fashioning and harnessing the wilds of the world is wrapped up in that word "subduing".

I see "fighting and wrestling" to be a natural God given drive to fulfill the role He has given man to do. If that 'impulse' is held and expressed within the God determined boundaries, it is a powerful force for provision, civilizing and the common good. But, like sexuality, if it is expressed outside the boundaries God determines, it can become a source of pain, suffering and destruction and ultimately even, death.

Human nature isn't pure...it must wrestle with sin...and sin seeks to pervert the creation and express it's nature to kill, steal and destroy.

For you are the children of your father the devil, and you love to do the evil things he does. He was a murderer from the beginning. He has always hated the truth, because there is no truth in him. When he lies, it is consistent with his character; for he is a liar and the father of lies. -Jesus (John 8:44)

But, I don't see the act of killing animals in the same light as killing human beings. Mankind is created in God's image, animals are creation of God but do not bear the image of God...just the breath of life from God. So, even the Lord killed animals and showed the proper use of them, and even directed mankind in the issues of consumption of animals in the OT, especially Leviticus.

And the LORD God made clothing from animal skins for Adam and his wife. Genesis 3:21

That said...the bible also speaks a lot about the care of animals too. I don't espouse an unbridled, unrestrained devouring of the earth in a consumeristic manner. We are called to rule with compassion and justice and to be good stewards of the earth...both in manner of ethics and economy as it relates to consumption.

When violence is turned towards those who are image bearers...the Bible starts getting very serious, even in the OT. Once we get to the NT...the ultimate vision of God's kingdom begins to dawn and dominate in the person and teaching of Christ...who by the way, caught and ate fish too. So a kingdom vision of the lion laying down with the lamb is a unfolding one that starts in the changed human heart and is outworked in wisdom and God given boundaries in this age.

The spilling of blood is very serious to God.

Ultimately, though I recognize and support the bearing of weapons in relationship to subduing nature and protecting humans from the wild...I find the killing of image bearers to be an act that Jesus forbids. So warriors are needed but the expression of the warring nature can be turned to evil or good. I know many would say that "self-defense" is an expression of that good...each will have to figure out how to outwork that as a principle for life. But for someone to point to the warrior 'impulse' as evidence of God's blessing of war....I would say that's a misuse of that power and responsibility.

For me....the best image I have in my mind...is Grizzly Adams...man in relationship to the wild, living off the land but doing so in a realistic but relational way...both with man and animals. 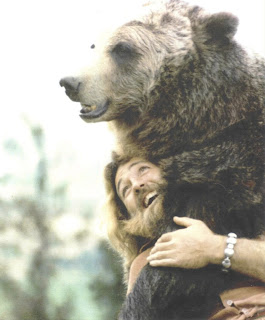 That's a vision of the my Father's world that was represented in His greatest Image bearer...Jesus Christ; and It's a vision of life, that I pray and work towards.

(Painting by Frank Frazetta)
Posted by Unknown at 1:29 PM