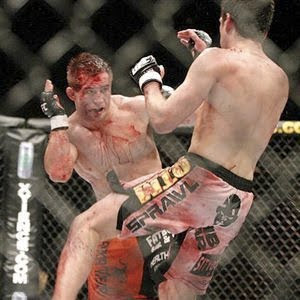 "If you've got a problem with blood then get a tampon.﻿" -MMA fan

I used to be a pretty big fan of the UFC...I would host the pay per view events, blog about the matches and revel in the high octane, testosterone mayhem. It was a chance to cheer for your own favorite Braveheart, Maximus or Aragorn in a 21st century way. Being born and raised playing guns & war....I have nursed at the breast of blood for decades. UFC was simply a step up in the food chain from the fat gut, masked men of late night wrestling to...men kicking each other in bath robes in the Martial Arts fights....and then to the puffy gloved days of fall asleep boxing. MMA was the natural evolution of this fighting thirst...just a few weapons short of a gladiator battle...but with chicks.

Being a pastor, and one with an aversion to "Pastels and Piety"...I was in lock step with the "Wild At Heart" message and the recovery of the 70's men's movement. But, even still, I could never get myself to attend a Promise Keepers rally...it just seemed like "imitation men's movement" to me, a bunch of "wannabe's" trying to steal the fire from Sam Keen and Robert Bly's glory days....all that crying, singing and hugging and potty talk gave me the quivers. I know God did some great things through it...but it seemed to wimpy to me.

Now...I wasn't going all buck nutty with the machismo ministry angle that some were; like those trying to insert manly worship tunes, like the brutha's at GodMen:

"We've been beaten down,
Feminized by the culture crowd
No more nice guy, timid and ashamed …
Grab a sword, don't be scared
Be a man, grow a pair!"

I felt there was some real legitimacy of the message..but some extremes were emerging....some were wacky and weepy and others were growing more and more in tune with baser instincts and carnal cravings in my opinion. I was awash in the swords and Spirit lingo, the art of capturing the imagery of the masculine soul...it resonated with me but looking back there was a warping influence that hit me like a pail of cold ice water one evening last year.

I recorded the season opener of UFC reality show "The Ultimate Fighter: Heavy Weights" and gathered my kiddies for a episode. As we got to the fight part...there came a moment when one of the dudes got his noggin clocked and hit the ground and the other dude was unleashing a furious assault of "ground and pound". Suddenly the bro on the mat started bleeding...and bleeding and soon it was gushing. The kids started squirming, the octagon started pooling up with blood and a slow horror gripped my soul and conscience as my daughter and younger son left the room in disgust. A deep shame gripped me like a cold blanket wrapped around my heart. I turned off the TV and sat in the crux of a parental failure for quite awhile. I haven't watched a match since.

After that confrontation with violence, I began to study, observe and prayerfully do some work of reexamining the men's message and the glorification of violence, war and brutality that seemed to be everywhere, now that I had been sensitized to it. It reminded me of some early church father's comments, paticularly Augustine:

In "Confessions" Augustine describes what happened to his friend Alypius when he let his friends drag him to the arena: "He was overcome by curiosity. He opened his eyes, prepared to despise and be superior to it, whatever it was, even while seeing it, and he was stricken with a deeper wound in his soul than the gladiator. … At the moment he saw that blood, he drank down savageness and did not turn away from it. He was riveted to it, drinking in frenzy unawares, and was delighted with that wicked fight and intoxicated with the bloody pastime. Nor was he the same man that he was when he had first come; he had become one of the crowd."

I began to see this "intoxication" all around me in my culture and now being baptized by the church.

In a Christianity today article: "A Jesus for Real Men: What the new masculinity movement gets right and wrong" the issue of a biblical view of masculinity is toughened up with some phrases that Mark Driscoll of Mars Hill, a church in Seattle, will forever be repeated in this ongoing discussion of what makes a real Christian man?

"Driscoll, "real men" avoid the church because it projects a "Richard Simmons, hippie, queer Christ" that "is no one to live for [and] is no one to die for." Driscoll explains, "Jesus was not a long-haired … effeminate-looking dude"; rather, he had "callused hands and big biceps." This is the sort of Christ men are drawn to—what Driscoll calls "Ultimate Fighting Jesus....Driscoll comes closest to imagining Jesus as the model of maleness when he argues that "latte-sipping Cabriolet drivers" do not represent biblical masculinity, because "real men"—like Jesus, Paul, and John the Baptist— are "dudes: heterosexual, win-a-fight, punch-you-in-the-nose dudes." In other words, because Jesus is not a "limp-wristed, dress-wearing hippie," the men created in his image are not sissified church boys; they are aggressive, assertive, and nonverbal."

Now MMA has moved from the TV set into the church: "The Jesus who eats red meat, drinks beer and beats on other men" My concern only grows.

Now if you are a regular reader to Crowbar Massage, you know that one of the more significant results of this seismic shift in my inner dispositions...has been my politics and views on violence as it relates to war and non-violence. I regularly blog about those topics at http://thedreamofeden.blogspot.com/ and on my Facebook page and as you know, that has been quite a "battle" of ideas both biblically and culturally. These issues run deep into the American psyche and surprisingly just as deep in the religious soul too. We are a people at war with ourselves, our families, our spouses, our Government, our enemies and even our brothers and sisters in Christ.

God said that the ground was cursed from one man's blood being spilt on it...I cannot imagine the darkness that has enveloped us as a people who worship and immortalize the warrior, who revel in the highest body count and sanctify the sword.

I pray that God will truly awaken us from our blood lust and loose us from the spirit of death and destruction that we have embraced.

"Lord, do you want us to call fire down from heaven to destroy them?"
But Jesus turned and rebuked them, And he said, "You do not know what kind of spirit you are of,
for the Son of Man did not come to destroy men's lives, but to save them. -Luke 9:51-56
Posted by Unknown at 8:19 PM

I remember vividly sitting on your couch over a year ago and watching UFC pay-per-view. Coming from a background of wrestling, I have always been intrigued with MMA, and have even seen some MMA fights of guys I used to wrestle in high school and college. However, it sounds like both of us have been on similar journeys when it comes to violence and war, and as I have read many of your posts on non-violence, I wondered how you would justify your love of MMA.

Unfortunately, my brother, who is not a follower of Christ still refers to you as the MMA pastor, and if I sent him the link to this post would simply call us both hypocrites. So I too "pray that God will truly awaken us from our blood lust and loose us from the spirit of death and destruction that we have embraced." I pray that we can become the light that unbelievers so desperately need to see.

Andy, I am a hypocrite...that's been the unfolding revelation. If I claim life and yet, embrace death...how am I prolife? The implications of wrestling with the way and truth of Jesus are life changing...or should be.

I'm still wrestling with the implications and if a finger was pointed at me in jugement, I would say "guilty, as charged".
I would wholeheartedly agree.

But, in the light of that cofession I have choices to make. I've begun my steps towards bringing my cofession as a follower of The Prince of Peace into actual actions.

That path requires repentance, which involves confessing one was wrong and changing ones thinking and course. I'm seeking to live out that transformation in many ways and in many areas.

I've still got a long way to go.

Here are some of the issues I am thinking about the implications of how the way of peace should affect:
-Video games (ie. Halo, COD, type games)
-TV watching (Tele averages 7 deaths per night)
-The Old Testament (reconciling NT with OT God)
-Military service (my support of those who serve)
-The pledge of Aligence
-The Rebuplican party (I've always considered them the most inline with my values, now that's all jacked up)
-Eating meat (it's the most visual and particaptory act of death)
-my inner disposition (I tend to be aggressive, confrontational and at odds with folks)
-My sword collection. I've collected weapons of war.

So you can see, I got plenty on my hypocrite plate.

I have been watching UFC on and off for years and have always thought that there was something good to it. Maybe it's that there is no lie, propaganda or distortion when the fight starts, just one man trying to overcome the other. Many times in the past, you see all the hoopla building up to the fight and then the two guys fight, one wins and they hug. When I see that, I think it is admirable. Unfortunately, I see less of that today in the UFC that I did two years ago. The UFC, in my opinion, is simply sliding downwards from competition to spectacle. Instead of being about who can win, it is about entertainment. Instead of attracting men who want to compete, it is attracting men who desire fortune and fame as there primary reason to fight. Of course, my watching the UFC is probably one of the smaller issues on my 'list of reasons I'm a hypocrite' but not unimportant at all as it goes to my attitude of accepting violence as useful. A dicey proposition I'm beginning to think. On another note, I think it would be nice if it was ok for Christians to get together and say "hey I'm still a sinner, anyone else have the same issues I have? How do we repent?" We're all hypocrites, it's part of being a fallen human, right?