The Temptations of Christ.... 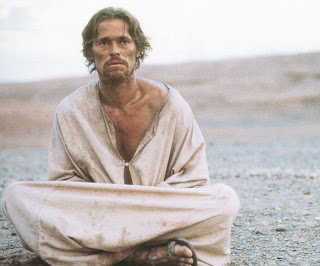 I've had a number of really good conversations with people after the message I preached on Sunday about "Temptation" and particularly the issues surrounding "sexual temptation". An issue that is extremely practical...just since Sunday, i've talked to Christians that are wrestling with pornography addiction, temptations to cheat on their spouses and this issue: Just How tempted was Jesus, in the area of sexuality?

The movie, "The Last Temptation of Christ" tried to deal with this theological conundrum..."Just how human was He"....and the cultural melee that ensued reflects the deep issues we have with this mystery.

The early church formulated it's theological understanding of this mystery in the Chalcedonian Creed, A.D. 451...based on its own times wrestling with the issue. It produced one of the most complete statements of this doctrine. It reads:

Therefore, following the holy fathers, we all with one accord teach men to acknowledge one and the same Son, our Lord Jesus Christ, at once complete in Godhead and complete in manhood, truly God and truly man, consisting also of a reasonable soul and body; of one substance with the Father as regards his Godhead, and at the same time of one substance with us as regards his manhood; like us in all respects, apart from sin; as regards his Godhead, begotten of the Father before the ages, but yet as regards his manhood begotten, for us men and for our salvation, of Mary the Virgin, the God-bearer; one and the same Christ, Son, Lord, Only-begotten, recognized in two natures, without confusion, without change, without division, without separation; the distinction of natures being in no way annulled by the union, but rather the characteristics of each nature being preserved and coming together to form one person and subsistence, not as parted or separated into two persons, but one and the same Son and Only-begotten God the Word, Lord Jesus Christ; even as the prophets from earliest times spoke of him, and our Lord Jesus Christ himself taught us, and the creed of the fathers has handed down to us.


It's an issue that many people have a hard time working through....what do verses like this really mean?

This High Priest of ours understands our weaknesses, for he faced all of the same testings we do, yet he did not sin.-Heb 4:15

God made him who had no sin to be sin for us, so that in him we might become the righteousness of God.
-2 Corinthians 5:21

Some honestly ask: "Can someone be tempted in the same way we are if you do not have a sinful nature?" Seems like saying that someone could be tempted to eat who has no appetite or stomach.

The bible seems to describe sin as something that is outside us:

Then the LORD said to Cain, "Why are you angry? Why is your face downcast? If you do what is right, will you not be accepted? But if you do not do what is right, sin is crouching at your door; it desires to have you, but you must master it." -Genesis 4:6-7

James 1:14-15 “But each one is tempted when he is drawn away by his own desires and enticed. Then, when desire has conceived, it gives birth to sin; and sin, when it is full-grown, brings forth death.”

And from within us:

And He said, "What comes out of a man, that defiles a man. "For from within, out of the heart of men, proceed evil thoughts, adulteries, fornications, murders, "thefts, covetousness, wickedness, deceit, lewdness, an evil eye, blasphemy, pride, foolishness. "All these evil things come from within and defile a man." -Mark 7:20-23

How does this relate to the experience of the temptations of Jesus...was it within or without or both?

The bible doesn't seem to address the issue of Jesus and sexuality. He was surrounded by women, served with them, empowered them, had women disciples. John 11: 5 says: "Jesus loved Martha and her sister and Lazarus."...but obviously, that love was a type of love that could be expressed to both man and woman. So...in the cannon there isnt much to point us to in understanding our own sexuality and temptations as it relates to Jesus as man.

But in the Gnostic gospels, the alternative papers of the time period; there was a bit of speculation and story telling going on, like in the Gospel of Philip:

"And the companion of [the saviour was Mar]y Ma[gda]lene. [Christ loved] M[ary] more than [all] the disci[ples, and used to] kiss her [often] on her [mouth]. The rest of [the disciples were offended by it and expressed disapproval]. They said to him "Why do you love her more than all of us?" The Saviour answered and said to them, "Why do I not love you like her?"

And in the Gospel of Mary which is usually dated to about the same period as that of the Gospel of Philip. The Gospel was first discovered in 1896, the Gospel is missing six pages from the beginning and four in the middle.

The identity of "Mary" appearing as the main character in the Gospel is sometimes disputed, but she is generally regarded to be Mary Magdalene. In the Gospel, Mary, presented here as one of the disciples, has seen a private vision from the resurrected Jesus and describes it to other disciples.

Peter said to Mary, "Sister we know that the Savior loved you more than the rest of woman. Tell us the words of the Savior which you remember which you know, but we do not, nor have we heard them." Mary answered and said, "What is hidden from you I will proclaim to you." And she began to speak to them these words: "I, she said, I saw the Lord in a vision and I said to Him, Lord I saw you today in a vision." Unfortunately, almost all of Mary's vision is within the lost pages.

Mary is then confronted by Andrew and Peter, who do not want to take it for granted what she says, because she is a woman:
"Did he then speak secretly with a woman, in preference to us, and not openly? Are we to turn back and all listen to her? Did he prefer her to us?" Then Mary grieved and said to Peter, "My brother Peter, what do you think? Do you think that I thought this up myself in my heart or that I am lying concerning the Savior?"

Mary is however defended by Levi:
"But if the Savior made her worthy, who are you to reject her? Surely the Savior knew her very well. For this reason he loved her more than us."

The repeated reference in the Gnostic texts of Mary as being loved by Jesus more than the others has been seen supporting the theory that the Beloved Disciple in the canonical Gospel of John was originally Mary Magdalene, before a later redactor made changes in the Gospel." (http://en.wikipedia.org/wiki/Mary_Magdalene)

So you can see, there have been Christians speculating on the issue for centuries. Is it a sin for Jesus to have potentially kissed Mary? Personally, I dont think so...it makes the above verses about Jesus knowing my struggles, seem more substantive, than hollow....but the Bible doesn't actually say much on the subject.

In the end, the Bible does say:

"No temptation has seized you except what is common to man. And God is faithful; he will not let you be tempted beyond what you can bear. But when you are tempted, he will also provide a way out so that you can stand up under it." -1 Corinthians 10:13

"The Lord knows how to rescue the godly from temptation..."-2 Peter 2:9

So, no matter what we are struggling with...God is able and willing to help us...in any temptation we face...which is comforting to me and provides a promise of hope for any struggling with temptations to sin.
Posted by Unknown at 9:28 AM