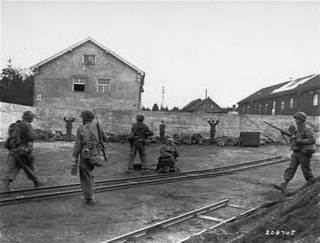 "The killing of unarmed POWs did not trouble many of the men in I company that day for to them the SS guards did not deserve the same protected status as enemy soldiers who have been captured after a valiant fight. To many of the men in I company, the SS were nothing more than wild, vicious animals whose role in this war was to starve, brutalize, torment, torture and murder helpless civilians." Flint Whitlock, The Rock of Anzio, From Sicily to Dachau: A history of the U.S. 45th Infantry Division.
From