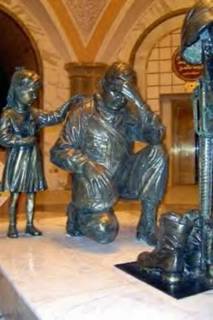 This statue currently stands outside the Iraqi palace, now home to the 4th Infantry division. It will eventually be shipped home and put in the memorial museum in Fort Hood, Texas.

The statue was created by an Iraqi artist named Kalat, who for years was forced by Saddam Hussein to make the many hundreds of bronze busts of Saddam that dotted Baghdad.

Kalat was so grateful for the Americans liberation of his country; he melted 3 of the heads of the fallen Saddam and made the statue as a memorial to the American soldiers and their fallen warriors. Kalat worked on this memorial night and day for several months.

To the left of the kneeling soldier is a small Iraqi girl giving the soldier comfort as he mourns the loss of his comrade in arms.

ummmm...
your stuff always hits right to the heart

Thans for sharing this with us.
Very moving.