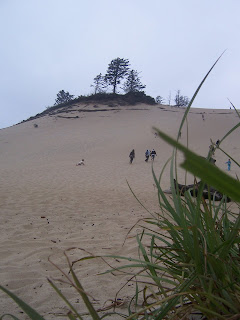 Pacific City has one of Oregon's largest sand dunes. It's a 45-degree uphill climb that's a ferocious BEAST to climb. Of course I say that; but as I was descending...I noticed a young woman doing it...with a child in her backpack...I felt like a weenie. The dune magnificently rises from the northern end of Cape Kiwanda, the last of the three capes along the Three Capes Scenic Route. If you make it to the top, you are rewarded with sweeping views of the coast on either side of Cape Kiwanda and Haystack Rock, a 327-foot rock formation off the coast. If you are real adventurous, you can rent sand-boards and ski down the dune! 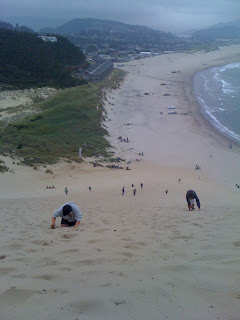 Micah, made it up first, Christian was over-confident and ran up the first quarter of the hill and exhausted himself and retreated in defeat...I made it second, slow and steady and here is Austin making his way up the last leg of the hill....on hands and knees. 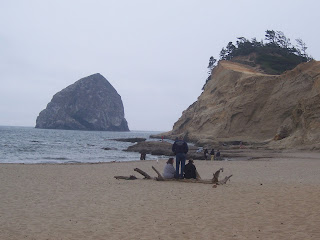 The massive Haystack rock is something to behold...the picture doesn't do it justice...there are hoards of swirling sea birds on the top of this thing...it looks ominously prehistoric. Pacific City is a must stop destination on the Oregon Coast.
Posted by Unknown at 3:39 PM