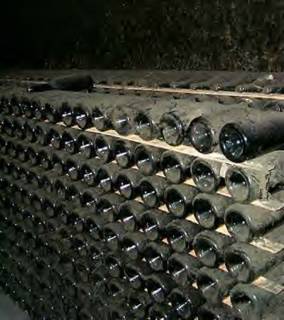 New wine has not settled on the lees, and is therefore fermenting; we cannot ascertain its quality or worth before it has settled, and the fermentation has ceased, for until then there is great risk of its corruption. The taste of it is rough and sharp, and an immoderate draught of it intoxicates.

Old wine has settled on the lees, and ferments no more like new wine; the quality of it is easily ascertained and it is now very safe from corruption, for all fermentation which might have proved pernicious has entirely ceased. Well-fermented wine is very rarely spoiled, the taste of it is pleasant, and its strength is in its own substance, not in the taste, and drinking it produces health and a sound constitution.
-(from a website talking about some of the writings of St. John of the cross).

When I read this portion, I thought a lot about the last year. In October of last year, the Lord visited me for a about a two month season in a rush of spiritual refreshment, revelation and vision. It was a season of immense outpouring, it seemed like it wouldn't stop, it just kept pouring and pouring and pouring. Much of the words, scriptures and revelation came from the book of Joel and various portions of scripture that spoke about new wine, oil and bread. It was a powerful time that ended about as abruptly as it started.

So much of what I thought was too take place didn't...in fact just the opposite, really, at least in the spirituals. Not that there hasn't been some amazing things this year but nothing near the potency of last years visitation and subsequent sense of being at the epicenter of something that was unfolding.

The punch of the present seemed to be speaking so much about being on the verge of something or that I was in a spiritual undertow of the Spirit and I had no idea what He was doing. I was just being pulled with such a glorious force that I was sure I was going to drown in it's heavenly waters. I experienced a season of joy that is so not my melancholy self, if you know me. It was deeply moving, words can not express how energizing it was to be in such a portent.

But that powerful wave that ripped me from all that I was fiddling around with...Just left me floating out in the sea. Feeling very, very, very empty by the sense of abandonment and unfulfilled desire.

This little paragraph above has spoken to me about this season and I am still chewing on it.

I'm not sure this pertains to your thoughts, but I have returned to reading Kempis daily and it is much appreciated. Like having what I imagine is a really good glass of wine. He is that for drink for me.