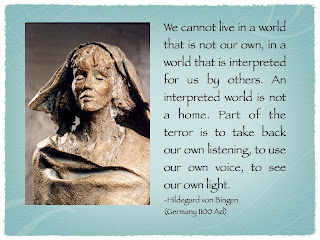 Sunday I preached a non Saccharine Sunday message on Luke 10:38-42. In that passage we explored the radical act of both Mary and Jesus. Mary broke with the cultural defined and allowed norms for women by taking a seat among the men, at the feet of Jesus, to listen. He allowed her to do so, taught her and even reprimanded Martha for trying to draw Mary back into the role Martha felt was more appropriate to the situation....ie. back in the kitchen.

Jesus was radical in a culture where some Rabbis prayed:

And some taught, like Rabbi Eliezer wrote in the 1st century CE: "Rather should the words of the Torah be burned than entrusted to a woman...Whoever teaches his daughter the Torah is like one who teaches her obscenity."

Or Greek men would express gratitude by gushing: “I was born a human being and not a beast, next, a man and not a woman, thirdly, a Greek and not a barbarian.”

Where leading Jewish historian's like Josephus, a contemporary of Jesus, and the apostle Paul said:“The Woman, says the law, is in all things inferior to the man.”

Where church fathers like Augustine taught that a woman can become the image of God by marriage and fulfilling their designed to be procreative partners.

In light of that, you can see just how revolutionary Jesus was in His ministry and methods. How liberating His words and actions were in Jewish culture. From talking to foreign women, to allowing bleeding unclean women or prostitutes to touch Him (kiss his feet, wipe their hair on his feet). His calling a healed woman a "daughter of Abraham" which was a unique title, including women in His band of disciples(Luke 8:1-3), being funded by single, business women with a history of demonic possession(Mark 16:9 )as well as others who funded his itinerant ministry. Choosing a woman to be the first preacher of His resurrection(John 20:17-18) which in that culture where women's testimonies were not legal in court...that was a major dignifying act!

I also used a passage in the book "The Two Towers" that retells the same issues in a different setting and way. The book expounds upon the feelings of Young Eowyn of Rohan and her struggle to become the warrior within her that was hidden by the princess she was outwardly. Her deep inner turmoil of duties and roles in the face of the times in which she lived and the needs of the hour. The book explores the fiery and sharp insight she had about the limiting roles our cultures place upon us and how often those most dear to us are most blind to who we really are in the heart. The book "The Return of the King" digs into the wound she bore in her soul in the chapter "The Houses of Healing" and the words of Gandalf and Aragorn are illuminating as any to the power of any man who can see a woman for who she truly longs to be seen. There is healing in those passages for those who have ears to hear.

I know some were upset and misunderstood the use of the film clip I used here and granted it was a bit intense for a typical Sunday morning church experience, in the future I will be more sensitive to children that sometimes are present. But I showed it because I truly felt led to include it in the discussion. The film captures the ethos of some of Eowyn's drama that is better for some people to captured visually. The look in her eyes when Aragorn, a man who also was wrestling with being a warrior on the outside and a king on the inside...saw her for who she truly was... " A Daughter of Kings"; was powerful. The high drama of her battle with the witch king and her fulfillment of the ancient prophesy that "No Man" could kill him...was potent and biblical from a certain angle (genesis 3).

I was able to use the book and the film in the evening service and I think a better weaving took place because of it. I hope the message was liberating and will burn through the surrounding controversy it may have evoked...because in the end...it was for freedom that Christ set us free and don't let anyone or anything subject you to the yoke of slavery again...(Galatians 5:1)
Posted by Unknown at 10:41 AM

well, I definately see how this clip fits perfect with the teaching but I also see why some were upset. The scary stuff in the middle is pretty intense, dark, and the bad guy is just....well intensly evil. Thats a bit much for people that aren't seasoned movie watchers. Maybe if you would have showed the first scene, and then the last part and skipped the middle?

Saying you were 'led' seems to nullify anyones objections or concerns. I'm sure in the future if your led to show a clip of similar intensity you'll be more careful about how much you show, which parts you instead describe, and warning parents of kidlets. If people are mad, the'll miss the message for sure.

That said, it's awesome how you pull in such a variety of material (quotes, visuals, media, music, stories etc) into your preaching!

Yes, being "led" doesn't sanctify the process or the path...it simply is a directional guide. If God says go North...I can get there by road or standing on peoples backs and heads...one leads forward with ease, the other is a crazy act of gymnastics and pain.

We all learn that delicate balance through experience.

For me, I will remember to "announce" in the future, when we are going to use clips of such a nature.

But...these two quotes are central to our "mission" ethic:

"Those who say that children must not be frightened may mean two things. They may mean (1) that we must not do anything likely to give the child those haunting, disabling, pathological fears against which ordinary courage is helpless: in fact, phobias. His mind must, if possible, be kept clear of things he can't bear to think of. Or they may mean (2) that we must try to keep out of his mind the knowledge that he is born into a world of death, violence, wounds, adventure, heroism and cowardice, good and evil. If they mean the first I agree with them: but not if they mean the second. The second would indeed be to give children a false impression and feed them on escapism in the bad sense. There is something ludicrous in the idea of so educating a generation which is born to the...atomic bomb. Since it is so likely that they will meet cruel enemies, let them at least have heard of brave knights and heroic courage. Otherwise you are making their destiny not brighter but darker." -C.S. Lewis

We are cool with that.

sounds goood. Good explanation of being 'led'...It's direction but not blue prints.

I think number one would apply more to fantasy like the lord or the rings, as far as children are concerned (and depending on the ages)....whearas...invisable children, or whats that famous movie called about the holocaust, or other real life stuff, would be more representative of #2.

I find it interesting that you preached this sermon, yet two blogs after this one you mention needing MEN to help move your planters for your community garden...just food for thought.