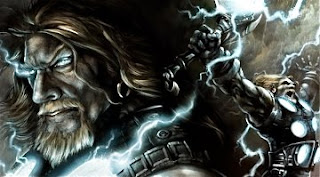 "Pure 'Northernness' engulfed me; a vision of huge, clear spaces hanging above the Atlantic in the endless twilight of Northern summer, remoteness, severity. . . ." This northernness is not necessarily Christian, but when turned to Christ it is redeemed like all sinful things and stands upright. But we have little interest in such redemptions or their results because the church in our era is slack and effeminate. We do not look at an unbounded northern sky and see the eternity of God; rather, we look mystically inward to the swamps and standing puddles of our own hearts and see just what one might expect in such places - but not very much and not very far. -C.S. Lewis

I was reminded of this quote from Lewis, as I was planning my purchase of the new J.R.R. Tolkien book, The Legend of Sigurd and Gudru...it's an early, long-unpublished work by Tolkien. It's a thorough reworking in verse of old Norse epics that predates Tolkien's writing of "The Hobbit" and "The Lord of the Rings" trilogy. The book includes an introduction by Tolkien and notes by his son, Christopher Tolkien. J.R.R. Tolkien, whose fantasy novels have sold millions of copies, he died in 1973. "The Legend of Sigurd and Gudrun" was written in the 1920s and '30s, when the author was teaching at Oxford University. 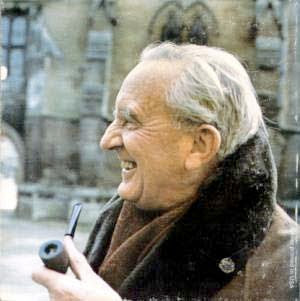 When I was purusing the book, I was so pleased to see how my favorite author was captured as well, by the truth that is found in the shadows of the old myths. They truly are shadows cast, unaware of the full Truth that is at the roots of their literary emanations. The truth of Christ, fulfills all those myths. He embodies the longings of all the cultures, people and ancient ways.

I've had a deep prophetic resonance with the shadow myths of the Northern lands of Scandinavia. I purchased this "Hammer of Thor" necklace when I was in Norway. I wear it when I preach to remind me of a June, 2004, prophetic word (Hammer of God, Arise) the Lord gave me while I was in Oslo, Norway. One of my deepest prayers is to participate in a church planting endeavor in the Scandinavia countries of Norway, Sweden and Finland...someday. 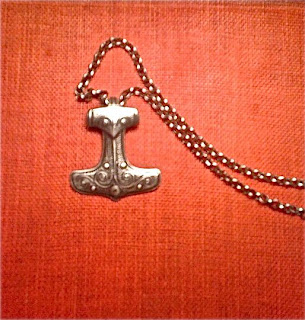 I took the quiz below and it told me: "You Scored as Thor...you are the mighty God Thor! You have the great hammer Mjollnir, as well as gloves and a belt of power. You are protector of the weak, and loved by all."

"Is not my word like as a fire? saith the LORD; and like a hammer that breaketh the rock in pieces?" -Jeremiah 23:29

Which Norse God Are You?
created with QuizFarm.com
Best music to listen to while taking quiz: Nox Arcana's: "Blood of the Dragon"
Posted by Unknown at 1:55 PM

I'm tied between Odin and Tyr.

"You are Odin. You are the leader of the Norse Gods. You are the wisest and always fight evil. You sacrificed your eye for knowledge, as well as hanging for 9 days with a spear in your side. You are the God of Philosophy and Poetry. You will lead the Gods into Ragnorak (the end of the world)"

"Tyr is the god of single combat, victory and heroic glory in Norse mythology, portrayed as a one-handed man. ...Tuesday is in fact "Tyr's Day."

i always thought that norse mythology was similar to Christianity in some ways. Odin (God) had a son Thor that was meant for the protection of mankind (Jesus), and Thor battles a great serpent named Jormugundr (like Satan)
?
similar enough, i can see that ancient truth was muddled up even in pagan in mythology. they didnt know that they were unoriginal in this grand epic scheme, which was fulfilled in christ.