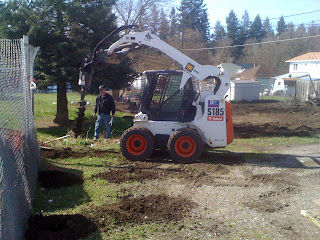 This Saturday we were able to get the fencing post holes dug, the cement and rocks removed from the garden plot and the ground leveled out, thanks to Zandtco Irrigation & Landscaping's generous use of their heavy equipment. 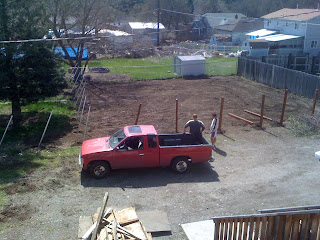 With the perimeter lined out and the fencing post holes dug; we are ready to set into place the fence posts and begin the construction of the planting beds. There was a lot of garbage, old cement and rocks in the plot of ground we are using, so they had to be hauled away. 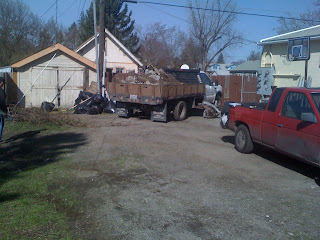 "We're part of nature...and if we separate ourselves from that, we're separating ourselves from our history, from the the things that tie us together. We don't want to live in a world where there are no recreational fishermen, where we've lost touch with the seasons, the tides, the things that connect us to ten thousand generations of human beings that were here before there were laptops, and ultimately connect us to God." We shouldn't be worshipping nature as God, he said, but nature is the way that God communicates to us..."with such texture and forcefulness in detail and grace and joy...and when we destroy large resources...by polluting so that people can't fish, or by making so many rules that people can't get out on the water, it's the moral equivalent of tearing the last pages out of the last Bible on Earth." -Robert F. Kennedy, Jr., as quoted in Last Child in the Woods.
Posted by Unknown at 3:49 PM

bobby was the only kennedy i could have supported... good stuff..
hopefully my back is doing better soon so i can come help...

Thanks for the update, Eric. The church we've settled on here is doing a very similar thing. Please keep posting updates when you can. And thanks to the guys from Zantco. Not the first time they've helped out!