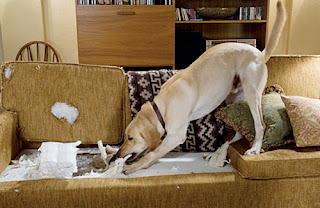 LeeElla, Micah, Austin and cousin Braydon and I watched Marley & Me the other night and I really enjoyed it; even though it was a modern Old Yeller in the emotional sense. The previews played it off more like a comedy, cute dog flick...but I felt it was much more than that. Dog ownership is perfectly portrayed in this film, the good, the bad and the ugly. Marriage, raising little ones and the complexities of navigating the mid life spinning compass, is nailed as well.

Now it might be that Im a dog owner/lover, have 4 kids (none nicknamed: "Whoops") and Im almost 40; but I thought there were some deep issues being outworked in this movie. Even though some of the subject matter was for more mature audiences (marital fights, miscarriage, sorrow etc) I felt it was good for my young ones to watch, feel and think about the situations presented in the movies. I will have my older ones watch it too, especially to demystify the romanticism that is often associated with relationships and marriage in most movies.

During the movie it evoked a number of questions from the kids: "Did you ever have a miscarriage? Why did the baby die? Do dogs go to heaven? Are babies really that hard? Good stuff. Of course I held Micah in my arms during the last quarter of the movie when the real drama hits, lots of tears...but I think, tears are good. Feeling sorrow is part of life, death and loss are sufferings that we all will face. Pretending that all stories have happy endings is not being honest about the world we live within. But there is nothing better than experiencing those moments together...and even films can help us prepare for the cups we will have to drink.
Posted by Unknown at 3:47 PM

i just rented it because it was a comedy with owen wilson and jennifer anniston... but it really made us think about not just dog ownership but our whole lives.....
we are having a hard time training our dog and were considering getting rid of him before we watched this...gonna keep him now... :-)