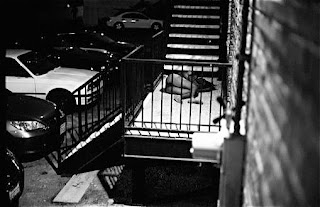 These photos were taken after a party, the photographer felt slightly ashamed that he might be exploiting the woman in her destituteness but the starkness of her plight won out. As he was taking the pictures, her pimps arrived and he had to hightail it inside.

The lurid nature of these pics struck me. If you have ever been involved in working with the homeless, prostitutes or seen the gutter up close and personal...this image isn't new to you. It's a horror that is hard to turn away from...and one that too many of us never see enough of. We live lives that have become desensitized or disconnected from the suffering, addicted, abused, broken and used up. We need some fresh reminders that sin is a viscous cancer...it rapes, erases, steals, demands, destroys, burns up, burns out and steals souls. We need to be present in the stench, depravity, shock and grittiness of lives sacrificed on the altars of depravity. The idols of devilry still drip with crimson and blackened blood...ancient possessions that demand the slow butchering of young and old lives. 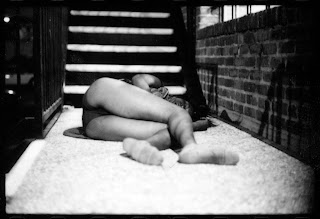 We live in a neighborhood where prostitution takes place...just yesterday, I passed a hooker and innocently glanced out my window in turning and caught eyes with the woman; she gave me one of those smiles...the kind that say I am open for business. It's fairly obvious around here...I saw another lady working the beat today...the fake shopping bags, the lingering at all the bus stops, acting like they are waiting for the bus. But the look of hard living is painfully etched in their meth drained faces. Addiction is a cruel master.

Spirit propelled and infused Christian mission is a redemptive war of King Josiah proportions...tearing down the altars in men and women's hearts, uprooting aged old temples of satanic servitude. Digging up the bones of past priests of pleasure and burning them to dust. (2 Kings 23:1-28; 2 Chronicles 34:29-35:19).

The horror though of it all, is that it's in the safe and serene places of American prosperity that we end up looking at pictures of realities that we never will attempt to engage. We grow content to let someone else rise, tear down and burn up...we've not "Found the Book" and been struck deep into the numbing core or our calloused souls. We've not ripped our garments in repentance and purged the temple of our own idolatrous hearts. Instead...we drive by, roll up the window, turn the page, click the mouse....ignoring the cries in our streets and neighborhoods.

We continue living the illusion that there are not young women laying in such vulnerable places...just center pieces for someone's voyeuristic blogish moralisms...
Posted by Unknown at 5:23 PM

it's painful stuff... all the horror of her experiences on display. not sure how i feel about it. the first picture tells more of the story, the second takes it too far and tells less story. we are all human, even knocked out loaded.

Yah, I knew these pics were really borderline but I felt they captured a street brutality, like few I've seen. The origionals were a set of three shots: far off, closer and closest. They took you from a distant "oh isn't that sad" pic to "oh my what's going on there" to "oh God, I'm not sure if I should be even looking". That process is self revealing. I think most pics on the Christian world keep us safely at stage one to often. Stage two might move us to action. Stage three exposes our own participation in the evil that causes her plight. Facing that fact is often more repentance than people want. Nuance is sometimes used in the prophets arsonal and other times it's outright blatant, raw, self revealing light. We can't hide from the fact that the seeds of our own lusts put girls and boys on to stairwells like that.

Our reactions to pictures like these often reveal more about our own hearts then the situation. I think there is a place for that kind of exposure. The scriptures are full of lurid prose, a fact that most moralist hide from. Ezekiel is outright pornographic in his prophetic prose. Read him, you will be scandalized and exposed.

Also.... I think the fact that her butt is showing but her face isn't...allowed me more freedom to post this. Her face would of made these shots to personal for me. The question we all need to ask is; "what if we knew these people by their names...more than their needs". I hope pics and talks like these could move us towards repentance and action to make that statement a reality.

It isn't that its graphic nature turns me off, rather I think many times photographers are careless with the dignity of people. It's too tempting to go for the shot without weighing the gravity of the persons dignity. It would help maybe to know more about the context of the photographer to the situation, did he just steal the shots and run as soon as he felt threatened? Did he check to see if her life was in danger? These are questions I ask when I see shots like this. I'm not turned off by the image, it's what's behind the image and it's capture that's distrubing.
Quite a contrast to the story behind the photography documenting mental institutions you wrote about. There is some powerful work.
As far as the seeds of our lust... collectively? To enjoy sexuality and the passions and pleasures there doesn't drag one into the prostitution racket.

Wow, great discussion. All issues that went right by me. Important issues I might add.
Love Dad