[Author's Commentary: This piece is a tough look at the underbelly of ugly Christianity. "The church is a whore and she is my mother." was a statement made by St. Augustine. I love the church, but people within her often make it a nauseous place. We all have contributed to the ills described below and we all can change it. I pray an honest affirmation and exposure of such issues can redirect us towards a more holistic and authentic gospel witness and experience.] 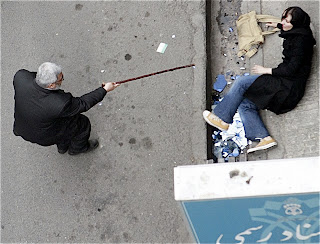 "He told them this parable: "No one tears a patch from a new garment and sews it on an old one. If he does, he will have torn the new garment, and the patch from the new will not match the old. And no one pours new wine into old wineskins. If he does, the new wine will burst the skins, the wine will run out and the wineskins will be ruined. No, new wine must be poured into new wineskins. And no one after drinking old wine wants the new, for he says, 'The old is better.' " -Jesus (Luke 5:36-39)

Religion is often the ugliest stick on the block and its most likely going to be wielded by the elders. This picture from the recent political uprisings and protests in Iran, perfectly captures the tension of the old and the new. Unless you have been a victim of the chaffing yoke of religious legalism, the suffocating fear based paranoia of tradition or the necropolis of pious formalities...you haven't truly tasted the liberating freedom of the gospel.

The English word "religion" is etymologically derived from the Latin word religo, meaning to "bind up." Religion binds people up in rules and regulations or in ritualistic patterns of devotion.

The barnacles of man-made religion or as Paul calls it in Colossians 2:23 "Self-Made Religion", can encrust a once sleek, adventurous, sea challenging vessel and turn it into an encrusted, dock-locked museum to a once dangerous, now retired, faith.

Many people end up fleeing these ghost ships that are mere haunts to the specters of bygone eras. These religious meetings become seances where bewitched dark gospel necromancers conjure the dead...but never empower the living. These modern idolaters build shrines to days gone by, but can't unleash a virile apostolic hoard upon the nations in need of templeless Christianity. Their ancestral power is woven with fear, they shackle the mind with childish apprehensions, godless anxieties and nepotistic emotional castrations that leave young dreamers impotent, paralyzed and chronically timid....skittish of their own God given passions and callings. 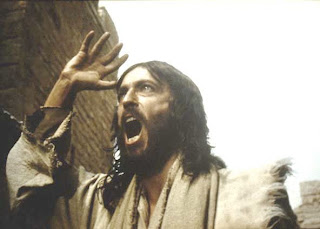 "But woe to you, scribes and Pharisees, hypocrites, because you shut off the kingdom of heaven from people; for you do not enter in yourselves, nor do you allow those who are entering to go in. -Jesus (Matthew 23:13

Such false spirituality is really evil and it nailed Jesus to a bloody Roman cross. History has seen countless young emerging believers, potential saints, have their destinies aborted on the cold, morbid religionists table. The horror will only be revealed in the eternals to come. The dwarfed and disfigured faith that is perpetrated on unsuspecting minds and hearts is wicked. The spiritual retardation that has been the result of such cultic constraints and thin, cliff-noted gospels is a betrayal of the wild, world shaking evangelion that we are meant to cast like free seed to the wind.

Such gangrene should be hacked off, gouged out with cancer like seriousness. It will take bold men and women to stand against the viral spread of such strands of churchianity.

And like Luther of old, we must live offensively not just defensively:

"If you wish to use your freedom, do so in secret as Paul says, (Rom 14:22) "The faith that you have, keep between yourself and God" but take care not to use your freedom in the sight of the weak, On the other hand, use your freedom constantly and consistently in the sight of and despite the tyrants and the stubborn so that they also may learn that they are impious, that their laws are of no avail for righteousness and that they had no right to set them up...These...resist, do the very opposite and offend them boldly lest by their impious views they drag many with them into error. In the presence of such men it is good to eat meat, break the fasts, and for the sake of the liberty of faith do other things which they regard as the greatest of sins. Of them we must say..."Let them alone, they are blind guides".
-Martin Luther in "Freedom of a Christian"

"It was for freedom that Christ set us free; therefore keep standing firm and do not be subject again to a yoke of slavery."
-Paul (Galatians 5:1)

I leave you with a prophetic injunction to heed or ignore: 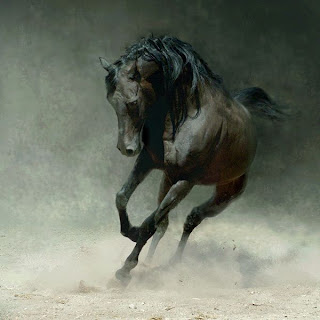 Lunge and Kick...Oh, loosed Stallion,
Shake your mane with gusts of liberty,
Rise up high into the open heavens,
Snort with the terror of joy,
Stomping hooves, rippling muscle,
Neigh fiercely in your wide-eyed confrontation,
Buck the saddle, the rein, the spur,
Leap like a thousand earth trembling waves,
Blaze an earth cloven trail behind your emancipation,
Charging mercilessly,
Becoming myth,
Vanguarding destiny,
Echoing truth,
For the corralled masses,
Gallop free....
Posted by Unknown at 7:42 AM

that is rich.. thanks bro.. sharing this message with my tuesday night men's fellowship next week

God speed bro...I pray it helps you loose stallions and prevent the perpetuation of gelding ministry.