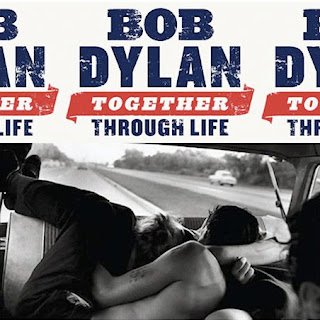 I recently purchased Bob Dylan's latest cd and though its not my favorite, there are some good tunes on it and its got a smoke'n hot picture on the cover. I'm a Dylan fan, because I think "words" are important (like: "smoke'n hot).
Songs that reflect a dearth of poetic sensibility, draw my ire. When the top 40 songs of today include "grunts and moans" and short stiletto phrases that sound like stuff copied from gas station stalls...I start to lose hope for this generation. But, everyone says that in their eras...I guess saying it...says more about me and my age. The older you get, you should become more attune to the sacredness of words. Dylan is a poet and prophet...but not in the biblical sense...but the human sense.

"Poets are not primarily trying to tell us, or get us, to do something." -Eugene Peterson

I've heard people complain that Dylan often doesn't make sense...but I think that observation is profoundly shallow. I think its sentiment is grounded in a misunderstanding of the true nature of parable, poetry and lyrical wisdom. We are lazy listeners, we want everything spelled out in 30 second commercials instead of doing the hard work of contemplation which true art requires. I think Dylan spells that out pretty good in this song:

I couldn't agree more...and to today, its as needed as ever.

On Dylan's new cd, In the song "I feel a Change Coming on" he mentions Billy Joe Shaver. I found this quote of Shaver's in the April edition of Rolling Stone; I thought it was priceless. He nails the power of words and how Dylan used them.

"After I first heard him, I got upset because I couldn't figure out what else there was left to say...I decided not to listen to him again or I'd go home with my hat in my hand. So I threw all my Dylan tapes in the Brazos river." -Billy Joe Shaver

Here is a great song and guitar solo by Billy and his band: and here is a great story: and here is an amazing testimony to the power of honest sinner and saint music to touch a life...I pray we can live in such authenticity and boldness, among those who do not claim to follow Jesus.
Posted by Unknown at 12:19 PM

Well this is an interesting post. I have never heard of Billy Joe Shaver, but after reading and listening to him I will have to have more. Good stuff, my kind of man. Great testimony written about how Shaver impacted that guy.
Love Dad