My Own Personal Apocalypse... 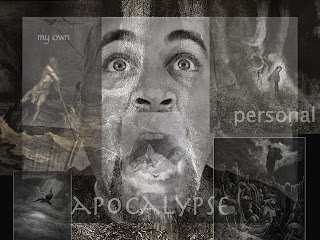 This summer I'm working on some Spirit ideas for a teaching series through the Book of Revelations. A daunting task but it's been nudging me and I can't seem to escape the audacity of it. But I'm thinking I will approach it from an artists perspective not a mathematicians. I will work on a multi-voiced experience including: music, poetry, drama, fine arts and whatever other artist I can rope into helping us explore our own Dante's Inferno via the artist's vision. I desire to attempt to enter the vision more than explain the revelation..which in my view, is more appropriate than the typical clinical postmortem disambiguation that happens with this work of art. If you are an artist or know someone who would be interested in joining me in exploring this book artistically...contact me at (www fcb4 at mac dot com)

My handling will be more In the spirit of Chesterton:

"There is a notion adrift everywhere that imagination, especially mystical imagination, is dangerous to man’s mental balance. Poets are commonly spoken of as psychologically unreliable; and generally there is a vague association between wreathing laurels in your hair and sticking straws in it. Facts and history utterly contradict this view. Most of the very great poets have been not only sane, but extremely business-like; and if Shakespeare ever really held horses, it was because he was much the safest man to hold them. Imagination does not breed insanity. Exactly what does breed insanity is reason. Poets do not go mad; but chess-players do. Mathematicians go mad, and cashiers; but creative artists very seldom.

I am not, as will be seen, in any sense attacking logic: I only say that this danger does lie in logic, not in imagination. Artistic paternity is as wholesome as physical paternity. Moreover, it is worthy of remark that when a poet really was morbid it was commonly because he had some weak spot of rationality on his brain. Poe, for instance, really was morbid; not because he was poetical, but because he was specially analytical. Even chess was too poetical for him; he disliked chess because it was full of knights and castles, like a poem. He avowedly preferred the black discs of draughts, because they were more like the mere black dots on a diagram.

Perhaps the strongest case of all is this: that only one great English poet went mad, Cowper. And he was definitely driven mad by logic, by the ugly and alien logic of predestination. Poetry was not the disease, but the medicine; poetry partly kept him in health. He could sometimes forget the red and thirsty hell to which his hideous necessitarianism dragged him among the wide waters and the white flat lilies of the Ouse. He was damned by John Calvin; he was almost saved by John Gilpin. Everywhere we see that men do not go mad by dreaming. Critics are much madder than poets. Homer is complete and calm enough; it is his critics who tear him into extravagant tatters. Shakespeare is quite himself; it is only some of his critics who have discovered that he was somebody else. And though St. John the Evangelist saw many strange monsters in his vision, he saw no creature so wild as one of his own commentators.

The general fact is simple. Poetry is sane because it floats easily in an infinite sea; reason seeks to cross the infinite sea, and so make it finite. The result is mental exhaustion, like the physical exhaustion of Mr. Holbein. To accept everything is an exercise, to understand everything a strain. The poet only desires exaltation and expansion, a world to stretch himself in. The poet only asks to get his head into the heavens. It is the logician who seeks to get the heavens into his head. And it is his head that splits." -G.K Chesterton - Orthodoxy. 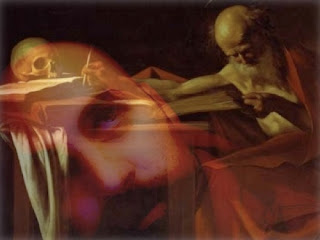 The four beasts and four and twenty elders fell down before the Lamb, having every one of them harps, and golden vials full of odours, which are the prayers of saints.
Revelation, 5. 8

Do I even gotta say anything?

"...To accept everything is an exercise, to understand everything a strain..." tell me about it(!) lol, keep me updated and let me know if there's anything that you specifically want.

*Cole
(I know it's not Rev. but I always thought that Proverbs 9:1-3 and 13-18 would make an awesome set:
"(Folly) sits at the door of her house...calling out to those who pass by...But little do they know that the dead are there, that her guests are in the depths of the grave...")