Are Conservative Commentators good for your Soul? 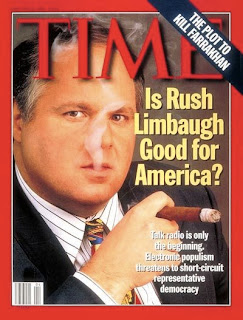 I was listening to Ruch yesterday and he was cajoling about how it was so ironic that he was in the hospital with chest pains while President Obama was on vacation in Hawaii too. He was sharing his nervous concern that Obama might possibly come to the hospital and offer his concern and sympathies. He was joking about how the fear of that happening was worse than the fear of his heart problems. As I listened to him...I was once again rolled over with another wave of disgust at the national talk radio, cable tv news animosity based commentary. Rush makes his living by continually keeping his message in a state of antagonism. He doesn't want answers...he wants ratings.

This industry of Madness is primarily consumed by the conservatives. Fox news out-rates all the others...and the majority of listeners that feed upon this source of news and commentary are Christians. Does that fact bother anyone else than myself? How has the leading sources of pissiness become the voice of the conservative Christians in this country?

"Get rid of all bitterness, rage, anger, harsh words, and slander, as well as all types of malice or evil behavior." -Ephesians 4:31

I guess, verses like these dont apply to our listening or viewing pleasure.

Are we truly getting fair and balanced news? When did these voices get anointed as the golden throated bastions of righteousness and rightness? I was also watching Bill O'Reilly's program last night and heard this conversation:

Bill O'Reilly: We need to go in there and blow the hell out of them.

This comment from Bill, was in the center of a hotheaded blather about how until Bill was angry that Obama calls us at War now...but we are not (according to Bill and the Analyst) acting like we are at war. The context involved Bill going on about how we need to send our troops into Pakistan and take out the enemy there. Then after he huffed and puffed about how we are not doing what is needed...he paused, and then with a editorial back track, said "Well, I dont advocate that, I know that we cant actually do that" or something really close to those words. In that stream of blow them up stuff...the analyst said that in this conflict we need to not -"OVER-worry" the collateral damage issue.

So...if you know we cant approach the conflict in that "drop the bomb" method...why the diatribe?

These types of conversations reinforce my general perception that we dont know what the hell we are talking about most of the time. And, I would add that we dont know half the truth either. In short...so much of our arm chair quarterbacking that is going on is pure msg and filler in our ratings hyped, ego saturated media and lazyboy American culture. The two loudest voices in news casting, are two diametrically opposed news networks...how does that happen? Who are these ex generals, news analysts, military strategists anyway? You drop a intelligent sounding title under some blokes name and Im supposed to take him as some authority figure?

Now, I watch or listen to Rush, Sean Hannity, Glen Beck and Bill regularly...not because I am a die hard fan but he is part of my roundup of talking heads, I listen too...as well, as Rachel Maddow and occasionally Keith Oberman. It's mostly because its the only source of political commentary I can find available....but the more I am subjected to personalities and a way of dialogue being chosen...the more Im getting tired of it.

I hope that some network, news outlet or political voices arise out of the rubble of our cultural brawling that eventually has got to get disillusioning to the intelligent masses...and builds a sane, non-partisan, truly libertarian dialogue that is both accurate and interesting.

But...until Christians start applying the Bible to themselves instead of everyone else...I dont imagine we will see it anytime soon.
Posted by Unknown at 8:49 AM

You're not the only one.

It really breaks my heart to listen to some of the things that are said. You can't confront them, they just will yell louder. Put you in your place.

I keep thinking there is a point where somebody like glenn beck goes too far and everybody sees the error of their ways. Well, I already think that Glenn Beck has gone too far- but I'm afraid that it will end up with one crazy personal LISTENING to all of this stuff and Obama is assassinated. Then have a country at war with itself.

Am I being overly dramatic? I think that believers have all to eagerly got caught in the battle for Truth in an increasingly secular society that they have lost touch with the Truth that God is concerned about the poor, the sick the lonely, the disenfranchised...

Oh yes I'm sure that God is royally pissed that some radical liberals in the white house are over taxing hardworking Americans to make some socialist atheist health care government control cabal. He would shower America with terror if we let the Gays move forward with their perverse agenda. We have to find this antichrist and kill him before its too late!!!

The point is Christians ought to be opening health care facilities. Giving people who are unemployed a chance at work. Fighting systems that bring torment to people- and not letting themselves get caught it a battle where nobody wins...

PS Eric, thanks for your posts. I rarely have time to comment, but they always stimulate good thoughts and discussions. Keep up the goods :)

But unfortunately, neither does our weekly sermon ingestion.

I'm waiting for some alternative political outlets that truly capture the spirit of journalism and activism but without the hard edge of partisan posturing. Not sure if that is possible...it seems such entities need the stink of dirty laundry or a devil to chase, in order to sustain a viable voice in this culture.

It's quite disillusioning to me, honestly. If anyone is aware of any mags, sites, programs that you feel aim at this...let me know.

I have to think that the following quote, although written over a hundred years ago, is pertinent to our Christian culture today.

“Mr. Mills says, in his book on Liberty, that “Christian morality is in great part merely a protest against paganism: its ideal is negative rather than positive, passive rather than active.”