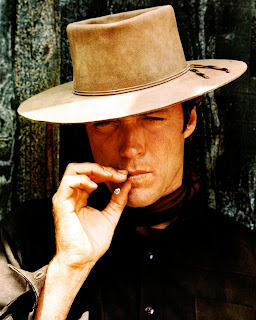 My boys and I, watched an old Clint Eastwood western called "Hang 'Em High" last night. It isn't my favorite of Clint's Westerns but it had some fairly deep issues going on in the plot.

One of the movies main characters is Judge Adam Fenton. He was based on the real-life figure of Isaac Charles Parker (1838-1896), the judge in charge of the U.S. Court for the Western District of Arkansas, based in Fort Smith. In his 21 years on that bench, Parker issued 160 death sentences, resulting in 79 executions. His first week at Fort Smith resulted in rulings leading to a six-man hanging, very much like the one depicted in "Hang 'em High", complete with a huge crowd of on-lookers, hymn-singing, and prayers, as well as massive press coverage.

This part of the movie resulted in some grunts from my youngest about what the heck those church folks were all excited about a "hanging for"? Preachers preaching, singing hymns, vendors selling drink and food...everyone gathered together as one big community to watch people die. It was bizarre to say the least.

Then there's conflicted Clint...he wants Justice, but sees the wheels of Justice rolling over innocent folks...he bears the scars of an intended illegal hanging on his own neck; as well as his aversion to some young men who are getting hanged for stealing.

So what does he do in this inner turmoil? He grabs a hooker and get's it on in the bordello...while outside, the church folk are singing the hymn: "Down at the river". On the gallows the condemned drunk is confessing his sins and preaching a prohibition sermon about "pouring the devil down his throat" to the crowd. The preacher is quoting scripture and a convicted old man is chewing tobacco for one last hurrah before his neck is broke...and the unrepentant are struggling under the black hoods...and the young brothers are saying their tearful goodbyes and the rope is slipped over their necks....all while the good man of Justice looks down from his courthouse window; on a wild, quasi-religious revival, pagan love fest, blood thirsty sports event that culminates in a jarring thud...of dead men dangling from ropes.

Quite a spectacle indeed...I thought this blogger summed it up well:

"The movie asks some very interesting questions, not the least of which is “Whose right is it to judge?” What I found most interesting and compelling about this movie is that it did not portray the judge as a cruel, heartless tyrant, but as a stern seeker of the truth, and who was genuinely concerned with the progress of the state (Oklahoma). Conversely, Eastwood plays the role of the one who is always confronting the judge about his judgments and the sometimes brutal nature of their outcome. Eastwood also bargains for the life of a man who he thinks is innocent, in a scene that makes us forget about the typological Eastwood character. There are also several very lucid dialogues between the judge and Eastwood, where the judge offers exposition on justice and his duty, even going so far as saying “I wish there was someone between me and God” – where he acknowledges the flawed nature of any justice system based on the judgments of man. These scenes often render Eastwood speechless, because the judge fully embraces his imperfection, yet the need for a justice system that is not seen as weak to those who would seek to exploit it, and for the good of the Oklahoma territory, which was not yet a state in the Union." (http://themultifariouspen.wordpress.com/)
Posted by Unknown at 9:36 AM