What to do when tragedy strikes.... 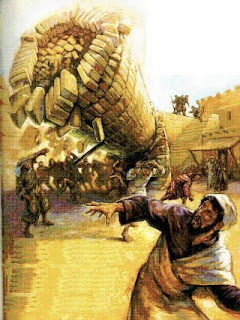 In this passage, two groups of folks were pointed at...the Galilean’s deaths at the hands of the Roman soldiers and the Jews who were working on the Roman aqueduct in Judea.

One happened to the Galilean Jews, that were often considered less spiritual and known for thier adversarial relationship with Rome. The other happened to the Jews in Judea that were cooperating with Rome and helping build on the water aqueduct. One group, the Judeans, thought of themselves more righteously than the Galileans.

The Pharisaic scholars of Judaism, centered in Jerusalem and Judea, found the Galileans to be insufficiently concerned about the details of Jewish observance-for example, the rules of Sabbath rest. The Talmud says that Yohanan ben Zakkai, a great Pharisee of the first century, was assigned to a post in Galilee during his training. In eighteen years he was asked only two questions of Jewish law, causing him to lament "O Galilee, O Galilee, in the end you shall be filled with wrongdoers!" (Jerusalem Talmud Shabbat 16:7, 15d).

This attitude seems to be the MO when disaster’s strike. We look at the people it happened to and begin to try to connect the “karmic” dots. You will hear people contemplating “why” this happened to “those” people. It was the same in Jesus’s day...and it still takes place today.

Jesus’s words light the way through this philosophical and theological conundrum:
“Unless you repent, you too will all perish."

Simply put...when death, tragedy, pain and destruction comes...and it will....we should use the light of that suffering to expose our own souls and lead us to repentance. We all will die and face God, someday...maybe years from now...or tonight. You do not know when. Today is the day to get right with God, embrace Him and the forgiveness He offers for our sins. Turn from sin and cling to the mercy and restoration found in the work of Jesus on the cross. Don’t put off the issues of your soul for some other day....because that day may never come.

Don’t trust in your own righteousness to save you...all of us are sinners. Our blessings are gifts not merits. Your abundance is given for others who lack. To those who are given much...much is required. God has a day of wrath coming...but today, our own sin, is our punishment.

We can be spared that coming day of wrath...by embracing the mercy and love of God found in Jesus, today.
Posted by Unknown at 7:28 PM

Amen.
And When he heard this, Jesus said, "This sickness will not end in death. No, it is for God's glory so that God's Son may be glorified through it." John 11:4

Eric,
When you click on the hot-linked Japanese text from "yoyo" above it takes you to some pretty inappropriate photos.
Just an fyi my friemd...