What Gospel have you heard...or taught...? 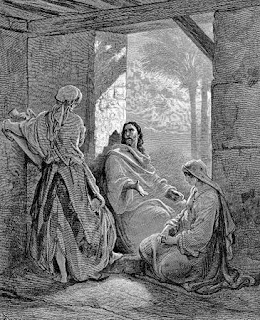 "Anyone who goes too far and does not abide in the teaching of Christ, does not have God; the one who abides in the teaching, he has both the Father and the Son." -2 John 1:9

It never ceases to amaze me, how many folks that claim to follow Jesus...consider the word's of Jesus to be void of authority. His word's really do not have to regulate thier lives. They say, He is Lord...but do not do what He says.

This is normative Christianity today.

Does that trouble anyone?

Could it be that the 'gospel' that has been preached, taught and modeled...is possibly a weak or watered down version of easy believeism? A modern equivalent of Bonhoeffer's "cheap grace"? Is it surprising to you to think about the fact that Jesus and the Apostles preached the gospel...before Jesus was ever crucified, buried and rose from the dead?

» And Jesus went about all Galilee, teaching in their synagogues, preaching the gospel of the kingdom, and healing all kinds of sickness and all kinds of disease among the people. (Matthew 4:23)

» And Jesus went about all the cities and villages, teaching in their synagogues, preaching the gospel of the kingdom, and healing every sickness and every disease among the people. (Matthew 9:35)

» [Jesus] said to them, "I must preach the kingdom of God to the other cities also, because for this purpose I have been sent." (Luke 4:43)

» Now it came to pass, afterward, that [Jesus] went through every city and village, preaching and bringing the glad tidings [gospel] of the kingdom of God. (Luke 8:1)

» The law and the prophets were until John. Since that time the Kingdom of God has been preached, and everyone is pressing into it. And it is easier for heaven and earth to pass away than for one tittle of the law to fail. (Luke 16:16-17)

» And this gospel of the kingdom will be preached in all the world as a witness to all the nations, and then the end will come. (Matthew 24:14)

Have you ever had anyone, seriously explain the "Good News" to you...the Pre-Calvary version? Doesn't that even sound heretical to say...? I know it does, just writing it.

My perplexing contemplations about the often..."complete and utter disregard" for Jesus's teaching is leading me to question wether or not...what folks have heard, has even been an accurate transmission of the Gospel Jesus taught.

The announcement of "good news"—the very best news that could be heard today—which the Father gave through Jesus Christ, was about His Kingdom being established on earth.

But what is a kingdom? It is essentially a nation, with all of its citizens, land, and laws, ruled by a government. In biblical usage, a kingdom can also mean a family from a single parent grown into a nation.

A kingdom has four basic elements:
1) a king, supreme ruler, or governing agent
2) territory, with its specific location and definite boundary lines
3) subjects or citizens within that territorial jurisdiction
4) and laws and a form of government through which the will of the ruler is exercised.

I propose...that If we ignore any one of these essential elements—if we ignore the whole message that Jesus Christ brought from the Father—we will have a distorted faith, one that will not bring salvation in the sense that Jesus meant.

Maybe, the fact that there is a rampant disconnect between saying one "Believes" and what one "Lives"...is far more of an issue than simply struggling humanity to do "gooder"? Maybe instead of making excuses for our failure to truly embrace and obey Jesus...we should examine the message we are consuming? Could it be...that the fruit of action...is a result, of the root of belief?

Have we placed the message of death, burial and resurrection in it's proper context with the broader context of the Kingdom of God? What happens if you separate them?

I think...you get some serious problems.
Posted by Unknown at 7:42 AM

The synoptics speak of the Kingdom, John speaks of eternal life, and Paul speaks of justification by faith... if you lose any one of those, you lose the gospel in its fullness. But if you are saying that the problem in the church is that we've not told people what to do enough - we haven't explained that the kingdom has laws - I think you are in for a further perversion... You'll have a whole generation of disciples finding their Identity in their kingdom works and obedience, and not in Jesus' work and obedience... That is a different problem than today (for the most part) but it is still a serious error.

I'm thinking of Luke 10, when the disciples' return from a fruitful mission and celebrate their work. Jesus rebukes them and tells them to celebrate that their names are written in the heaven. The idea of having your name written down meant that you were someone of significance, and in this case "in heaven." If we find our significance in his gracious acceptance of us, at a very deep level, we'll of natural course give ourselves to his works... If you love me, you'll obey my commandments.

So again, I think the problem is that we've failed to really preach/teach all three... but in my mind, it is a motivation issue, not an information issue. "he who is forgiven little loves little" - a church full of people who don't think they have much to be forgiven of is a church who will love very little. So the problem is not that they don't know they should obey, it is that they aren't motivated by grace to obey.

At least thats my 2 cents.

"...if you lose any one of those, you lose the gospel in its fullness."

That's a really important point. The one i'm trying to get at.

Though...Im not sure I agree that the answer to "lukewarm, compromising, sin embracing, obedience free christianity" is helping folks know that they are loved more.

I get the "motivational" point of view...but it seems in my world...love of self...is the root of most gospel rejection.

I also wonder if the early church had the advantage of this "three-fold" writing based Christianity. If the early communities didn't get around to some of those writers...do you think they would have a faith that resulted in error?

I think pretty much all the teaching I have received has been, the Gospel is the death and resurrection of Christ and his teaching and words are just a really high idealistic bar. I can't tell you how many messages I have heard on "What Jesus really meant." No one wants to take Jesus words at face value. It's too controversial. It causes too many problems in our American life. To think about Jesus words being just as much a part of the Gospel as the death and resurrection is pretty life changing. Maybe it's elementary to some but if you've never heard it... then it's not.
(Oh yah, this is Steve)

Eric - I think the 3-fold is there in all the gospels, and you see it woven through Acts, too, so it seems that the gospel preached had all of these facets. Mark's gospel (earliest gospel) is a good example: clearly written as a manual of discipleship (following Jesus costs you everything, the "lordship" of Jesus, your whole life as a servant just as the son of man came to serve, etc), it is still profoundly cross-centered in a "justification by faith" kind of way... the Roman Centurion at the end is the only person who confesses Jesus' true identity as "Son of God", and it only happens on the cross... clearly part of Mark's message is that salvation happens at that cross to people outside the fold.

Seems like the early church instinctively understood that justification by faith alone led into all of life obedience - I think most countries where following Jesus means possible martyrdom get this as a matter of course... But even then it is a motivational issue: you are willing to give up everything to be with Jesus because you love him and are deeply convinced of the full weight of the atonement. This is why Paul, Peter, and John almost exclusively refer back to the cross, not back to Jesus way of life, even when giving ethical instructions (ie, marriage in Eph 5 or giving in 1 Cor 8). The only place I can think of where that isn't true is 1 Peter 2.21-25, but even there he ends up with substitution not example.

My fear is that we put a new emphasis on "giving up everything for Jesus" (which is great!) but fail to see that many people we are frustrated with for their lack of obedience don't actually love Jesus deeply, and though they can recite all the doctrines of grace, they aren't amazed by grace!