The Pornification of our world... 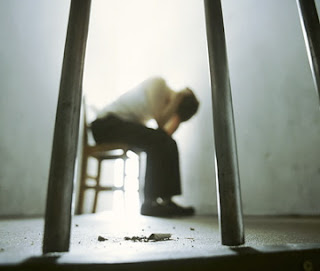 It was surreal and vile...I was wishing for a sink to wash my hands and at the same time painfully and darkly reminiscent of the bondage I was in when I was saved. On the wall, in the room I surrendered my heart to Jesus, I had a cross made out of playboy centerfold's. I truly worshipped the flesh. It was a god to me...a slavish, demanding, foot to back of the neck, chain tightening, soul searing, woman dehumanizing...idol.

I was graced with deliverance and trained with ongoing wisdom in my unfolding walk with Christ. In Jesus, I found a strong and able exorcist for my inner cage of demons. I didn't lose the temptations, the lusts or the love of women...but the chain was broken, the captive was allowed to walk free, if I wanted too...and I did.

"Every 39 seconds a new pornographic video is being made. There are 1.5 billion pornographic Internet downloads a month. Between the years 2005 and 2006 the pornography business increased by an almost a billion dollars. Men are viewed as having this addiction, but women are affected as well. 40 million adults in the United States regularly visit pornography sites. Of those 40 million only 10% (four million adults) admitted to having a sexual addiction to pornography. Of the four million adults who admitted to having a sexual addiction problem, 680,000 are women. 17% of the 680,000 women say they struggle with pornography addiction. This is the same number of women who are addicted to alcohol or drugs."

It's a deceptive form of inner lithium.

"He will again have compassion on us; He will tread our iniquities under foot. Yes, You will cast all their sins Into the depths of the sea." -Micah 7:19

If you are a sex slave...call out to Jesus. He can and will deliver you, exercise your inner demons and wash you whiter than snow and then put you on a path towards healing, restoration and purity of heart.

Here are some folks that spend a lot of time and resources on helping people find freedom and balance in their inner lives.
http://xxxchurch.com/ and here is a online program to help you begin the journey out of darkness and into the light: http://x3pure.com/

Thank you Jesus that he had mercy on you...AND me, and delivered you before we were married. So glad that I have not had the heartache that comes with spousal pornography abuse. Thank you Jesus...
LeeElla

EDIT... I meant to say that Lee knows the source of that strength. Need bigger keys on my keyboard... or smaller fingers.