As I was ascending my arduous climb up to the Ben Burr Trail, I was stopped dead in my tracks by this little fellow. After such a long and hard winter and a dreary few weeks, this little face was almost exciting. Quite joyful, peeking out of the earth, with his arms all open, as if praising God....or at least thats what I felt like, while looking down on his little resurrection. I felt like brother Frank, climbing around the rocks, slightly caught up in the warming of life starting to make itself known.

It reminds me of the prayer of St. Frank:

Praised be You my Lord through our Sister, Mother Earth who sustains and governs us, producing varied fruits with coloured flowers and herbs."
-Selection from the prayer/poem Canticle of Brother Sun and Sister Moon of St. Francis of Assisi (The real father of the green movement) 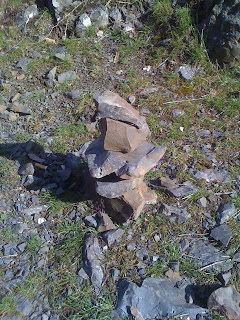 I was equally thrilled to see that someone has been picking up garbage this week on the trail...I bless you, whoever you are! And across from the condom wrapper, buried condom and beer cans, that have been removed...was this little piece of art. Offered as a testimony of care, I am sure....or at least that's how I took it. Such acts matter...and when we do them, we might only think of the moment, but the ripple of that leads to many more places and actions than we ever will know, until we meet the Lord who will reveal to us the mosaic of connections our thoughts, prayers and actions accomplished or sparked.

Praise be to God for simple things...and simple people.
Posted by Unknown at 12:44 PM

This post reminds me of the great artisans who built the cathedrals of the past... That they would take the time to meticulously carve a tiny bird into an unseen corner of the roof, knowing that no human being would probably ever see it, but that God would see it, and honor their work. It's humbling how God works in and cares about so many tiny details.

I have a very irreligious friend who walks the Ben Burr trail often, and is always making rock stacks, in fact, in all our travels, he usually leaves a rock stack somewhere, and when we camp at his "church", Priest Lake, he often makes quite elaborate rock stacks and prayer circles out of various things in finds in Mother Nature's Queendom.