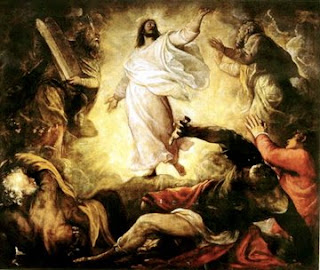 "While Jesus was praying, the appearance of His face became different and His clothing became white and gleaming...While Peter was saying things he didn't understand...a cloud formed and began to overshadow them; and they were afraid as they entered the cloud...and a voice came out of the cloud and said this is my My Son, My chosen One, listen to Him!...and when the voice had spoken, Jesus was found alone and they kept silent and reported to no one in those days, any of the things which they had seen. " -Luke 9:28-36

Sometimes the God that never changes...changes His appearance, right in front of us...and it's usually in the midst of a prayerful life. It's often with others and involves many arduous paths up to private places of solitude.

When the Lord unveils Himself in these life altering and profoundly transforming ways; the results are the same...it opens your eyes and shuts your mouth. Clouds form before...His form is only seen.

God descends onto mountain tops still...He calls us to journey up together, then isolates us in the moment of sight blinding revelation...falling tongues of fire always seem to divide and separate onto individual minds...and yet ultimately unify...all in a rush of mysterious God storms.

When God unveils Himself...there is always a Voice.

Sometimes it's languages that you understand...but the speakers don't...sometimes it's mysteries that envelope you and hold you in a creative, sustaining visitation of communication...your sprit prays...but your mind is clueless. In the beginning is always the Word....but the Word doesn't always come in the tongues of men...often its angelic. Shouldn't the restoration of earth...include the languages of earth and heaven?

Jesus still comes in parables...the upper room was filled with parable tongues...Mary thought he was the gardener at the empty tomb...Paul was blinded by His coming and could only ask: "Who are You?"...The disciples stood on the shore as risen Jesus cooked breakfast and whispered to one another about not asking if it was Jesus...the two traveling conversationalists hiking back to Emmaus talked to walking Jesus for miles and not until He broke bread, did they see Him...but then He vanished.

John saw Him as a lamb covered in all seeing eyes, as a bloody and slain sacrifice, star holding tattooed one, slaying the earth with poetic words that kill before they ever bring to life; He who all of the eternal bards compose songs for and the One who is a baby flying in the air amdist women with wings and dragons that drink the waters of the earth.

He is still Mystery to me....and in His darkness...I am seeing more and more light.

The emotions and the experience,
the gratitude or the terror,
associated with transformation
are very different from
what transformation actually is.
-Robert Kegan

(Excerpts from yesterdays Sunday messages)
Posted by Unknown at 8:20 AM

"When the Lord unveils Himself in these life altering and profoundly transforming ways; the results are the same...it opens your eyes and shuts your mouth."

Isn't that exactly what happened to Job? And to Isaiah? And Ezekiel? I want to be changed by seeing God as He is, not to change who He is in my own perception.

This post instills a greater hunger to know Him in Spirit and in truth, to see Him more clearly and understand His heart more fully, all the while acknowledging that He will always, thankfully, be cloaked in mystery, and there will always be new, fresh revelations of His Being to be discovered. It's all terribly exciting! :)

It's the mystery of eating the bread of life and drinking the living water and yet having a righteous hunger and thirst...and yet ever coming to the table to eat the bread and drink the cup of Christ.